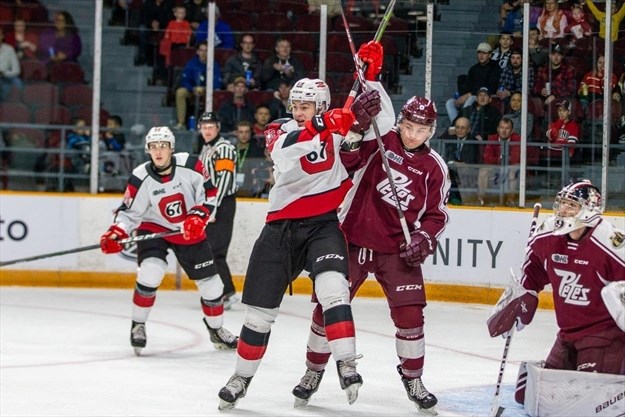 Even though it’s Christmas, the Ottawa 67’s will be gearing up for an important weekend where they will have a chance to take over the top spot in the Eastern conference. Lets now take a look back at the week that was!

@Oshawa: The Ottawa 67’s were in Oshawa to take on the Generals on Friday night and would be without Marco Rossi who went home for an extended break. I thought the 67’s might not put a full effort into this game, but I was wrong. I should know better than to doubt this team like that, but I thought they would be looking forward to the break. The 67’s would open the scoring in this game, something they can never do at home. The game would remain 1-0 until Allan McShane scored nearly 9 minutes into the second period. With the game tied at 1, the 67’s would get two quick goals from Noel Hoefenmayer, but the Generals would answer back with two quick ones of their own. Brett Neumann would give the Generals a 4-3 lead on a power play goal mid way through the 3rd period. Without Marco Rossi, the 67’s would need someone to step up and do something, and that’s exactly what they got. Jack Beck scored his first of the season to tie the game in the 3rd period. He wasn’t done there though. Beck would be the one to score the game winner in overtime. It was cool that he was able to get his first goal in the OHL on the night, but he managed to score 2! For a guy who hasn’t scored all year, it’s impressive that he was able to do what he did. Unfortunately for me, I picked the Generals. My predictions record is now 23-7.

Here is a look at the standings for week 14

As for the Petes this weekend, the 67’s have a golden opportunity to take control of the East. The Petes will play the Guelph Storm, Ottawa, and the Niagara IceDogs this week. There is a chance the Petes lose 2 games this week should the 67’s be able to beat them, and that’s just what the doctor ordered right about now. Speaking of the upcoming week of games, lets get to it!

@Kingston: The 67’s have already played the Fronts 3 times this season and they have yet to be beaten by Shane Wright and crew, and that won’t be changing here. The Frontenacs are simply not on the same level as the 67’s, and despite them having some close games this season, we saw last time these two met just how much better the 67’s really are. We are gonna keep this short and sweet today, and the 67’s are going to win this game by a score of 5-3. This game is a game you need to win, especially considering the Petes are in town the next night. Losing easy points is a recipe for disaster in a tight race like this one.

Vs. Peterborough: This is a huge game for the 67’s. This game could go a long way to deciding who finishes in the top spot in the East. These teams have met 3 times already this season, and the 67’s have only won one of them. They won that game in overtime. The Petes are going to be a serious challenge, but one that needs to be taken. One member of the Petes will be missing due to the World Juniors, and the 67’s will be without Kevin Bahl, but one thing the 67’s have that they didn’t for the first two meetings was Joe Garreffa. For me, Garreffa is the key to this game. Since the trade, the 67’s have been the best team in the OHL, and currently have a .800 point percentage. Those kinds of numbers are unheard of, and I think that in the long term the 67’s are the better team before anymore trades are made. For my prediction, I’m taking the 67’s in a slim 5-4 victory.

The Wednesday game against the Genereals will be on the next edition of the review/preview. As for now, everyone at 613 Spots wishes you a Happy Holidays! If you missed the 67’s decade in review, here’s a link! https://613sportsblog.com/2019/12/24/ottawa-67s-decade-in-review/