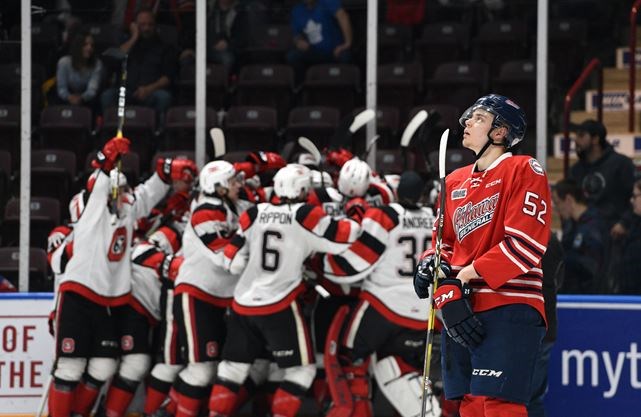 The Ottawa 67’s are one of the hottest teams in the OHL right now, and it couldn’t have come at a better time. The 67’s spend the weekend on the road stopping in Niagara, Erie, and Hamilton. Let’s get to the review.

The 67’s followed the script in this game. Despite Mitch Hoelscher scoring the first goal of the game, the 67’s found themselves down 3-1 after the first period. At this point, the 67’s just want to make things difficult in the first period, because starting in the second period, the 67’s would score 7 unanswered goals. Felix-Antoine Tourigny scored his first career OHL goal in the game, so congrats to him. The 67’s dominated the 2nd period out-shooting the IceDogs 17-3 and scoring 5 goals. I had predicted Niagara winning this game in overtime, and boy was I wrong. My record falls to 10-4

@Erie: This was the one game that if you missed, you didn’t miss much. The game ended 2-0 for Ottawa with goals coming from Mitch Hoelscher and Austen Keating. Shot out to Cedrick Andree for his 32 save shutout. I predicted Ottawa to win this game, and they did. My record improves to 11-4

Again, starting the game down 1-0 after a Jan Jenik shot from the slot beat Will Cranley cleanly. Of course, the 67’s stormed back for 3 quick goals from Jack Quinn, Noel Hoefenmayer, and Joe Garreffa. Tag Bertuzzi would answer in the second period to bring the game to 3-2. Once again, the 67’s would score a couple quick ones, and this time it would be Quinn Yule and Mitch Hoelscher. The 67’s and Bulldogs would trade goals in the 3rd period, and the 67’s would come away with a 7-4 win. I picked the 67’s to win this game, and that will improve my record to 12-4.

Well boy oh boy isn’t this a huge weekend for the 67’s and the standings. The 67’s are going to clash with the Oshawa Generals, and the Peterborough Petes (again).

Vs. Oshawa: The 67’s will meet the Generals for the first time since they swept them in the 3rd round of the OHL playoffs last season. This season, the Generals are the best team in the east and sit one single point above the 67’s in the standings. Beating Oshawa would be huge for the 67’s. It would leap frog them all the way from 4th in the east to first. Yes, it is early, but when has it ever been a bad thing to be in first. There is no denying the talent on the Generals, but the 67’s are on fire right now. For that reason alone, I’m saying Ottawa takes this game 3-2 in overtime.

@Peterborough: Again, the Petes. For the 3rd time this season, the 67’s and Petes will go head to head, this time the game will be in Peterborough. While the 67’s are hot, the Petes have had their number so far winning the two previous meetings. I find it hard to think the 67’s will continue to struggle against them for much longer, and after the Joe Garreffa addition, the 67’s are stronger than the last time these two rivals met. Maybe the fan bus heading to Peterborough will spark the 67’s to come away with the win. I’ve got the 67’s winning by a score of 5-2.

Winning these two games would be huge for the 67’s. Knowing that these are huge games to the standings, I expect the two best games the 67’s have played all season. There shouldn’t be any of this coming out of the gates slowly. Cedrick Andree should be playing both these games after he only played one last weekend, and he should be able to carry the 67’s to the victory.