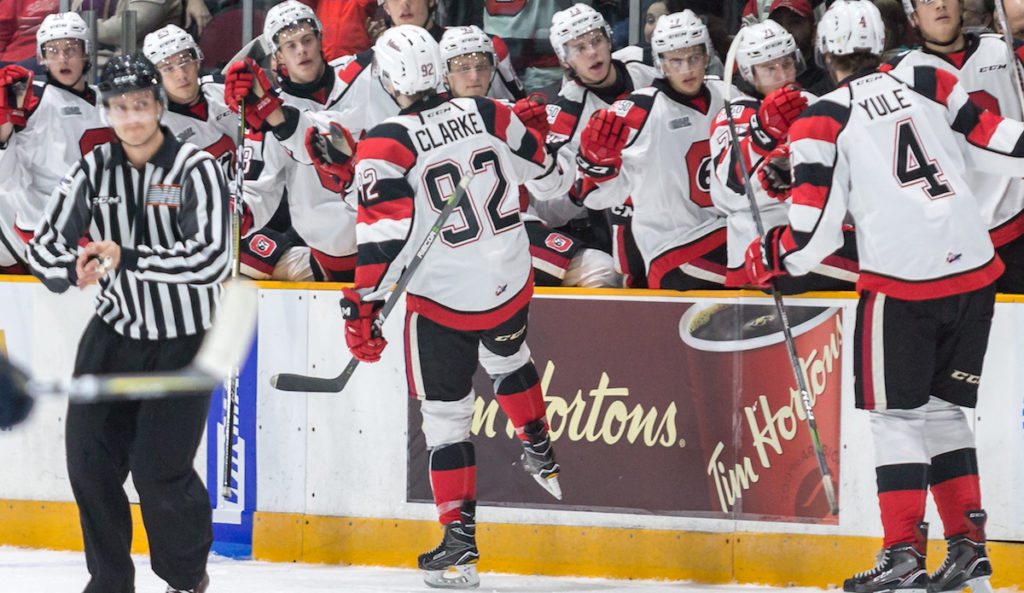 The 67’s continued their season over the weekend, playing Kingston on Friday, and the home opener against the Pete’s on Sunday. The 67’s may be 3-1 on the season, but there is still plenty to work on to get back to a championship level they were at last season.

@Kingston: The 67’s traveled to Kingston on Friday night having won their first 2 games in the shootout. Will Cranley got the start in this game, and the 67’s would be without Marco Rossi for the first of five games after he was suspended five games for this hit.

Losing the best player on the team for any team is always tough, but for the 67’s, having such a young team with no secondary scoring so far makes this so much worse. Never the less, the 67’s rolled into Kingston looking to do damage. The first goal of the game would come in the second period when Dylan Robinson found Merrick Rippon open in the slot. That lead didn’t last long, and Nick Wong buried an easy cross-crease pass past Will Cranley. Ottawa would answer back in the third and it would be Graeme Clarke picking the puck up behind the net and putting past a confused Brendan Bonello. Just like last week, this game was destined for overtime, and the Fronts would score just 4 minutes later of a puck Cranley couldn’t squeeze. Eleven seconds into overtime however, Jack Quinn would be the hero for Ottawa scoring on a shot from the slot. I predicted an Ottawa win in this game, and that improves my record to 2-1.

Vs. Peterborough: The 67’s celebrated the achievements of last season by raising 3 banners to the rafters of the arena at TD Place, including “Regular Season Champions”, “East Division Champions”, and “Eastern Conference Champions”.

When the puck was down, the 67’s looked lost in the first period, but managed to get the the intermission with no score. The Pete’s would score the first goal of the game, but it wouldn’t be without controversy. Everyone in the arena thought that it would be called goaltender interferance, but no such call was coming. The goal remained and the Pete’s would take a 1-0 lead. Mitch Hoelscher would tip in a point shot from Noel Hoefenmayer 6 minutes later to tie the game. The Pete’s would soon there after score on a juicy rebound after Cedrick Andree failed to catch the origional shot, Peterborough would take a 2-1 lead. On the poweplay, the Jack Quinn would find Hoelsher with a beatiful pass and he would net his second goal of the game to tie things up at 2.

Despite numerous quality chances, that would be the last 67’s goal of the day, and Zach Gallant would put the dagger into the heart of the 67’s and their fans to win the game 3-2. I predicted a Pete’s win in this game, and that will improve my record to 3-1.

Like I said in the preview for these games last week, secondary scoring, or lack there of, is going to be the downfall of the 67’s if this trend continues. There is plenty of time to make things happen still, but it will be a long season if they continue to rely only on Graeme Clarke, Marco Rossi and Mitch Hoelsher for all their goals.

@Windsor: The 67’s are headed out on a western road trip this weekend, and will be playing some good hockey teams. The Spitfires share the 67’s record at 3-1, and haven’t been scoring much, other than the 9 spot they put up against the Pete’s. Good goal tending is going to be important, but the 67’s will need to score some goals to win this game. We don’t yet know who will be starting in goal for any of the games this weekend, but we can expect to see Cranley in at least one game I would think. No matter who plays this game, they will need to play well. This 67’s squad needs some help and good goal tending is just what the doctor ordered. That being said, I think they get that on Thursday, and the 67’s are going to win this game 4-1.

@London: Oh boy, London! The Knights are 2-2 to start the season, but they have won their last 2 games. We all know the challenge the Knights provide to any team, especially when they play at home. Shutting down Conner McMichael in this game is the easy key to victory. Through 4 games this season, McMichael has 7 goals and 3 assists. Right now, I think the Knights are on a different level than the 67’s, and for that reason I’m going to take the Knights by a score of 6-2. This will be a statement game, and we will learn a lot about what the 67’s are in this game. If they can manage to win this game without Marco Rossi, they could put the OHL on notice in a big way.

@Kitchener: The Rangers recently acquired Liam Hawel via trade with the Guelph Storm, but they don’t seem to have any spectacular players on the roster in term of point totals. The Rangers are 1-1-1-1 this season, meaning 1 win, 1 loss, 1 overtime loss, and 1 shootout loss for those of you who don’t follow the OHL closely. For me, all the 67’s have to do to win this game is play their brand of hockey. If the 67’s are able to dictate the flow of this game and play fast hockey, they should win this game without much of an issue. The goal tending for the 67’s this season has been good so far, and if that can continue and the 67’s dictate the game, they will win. My prediction, Ottawa wins 4-0.

This week is going to be the toughest weekend so far, and could end up being the toughest of the year. This weekend could go down as the turning point of the season. A good weekend could build some confidence and be a good thing to build off of for a very young 67’s team.