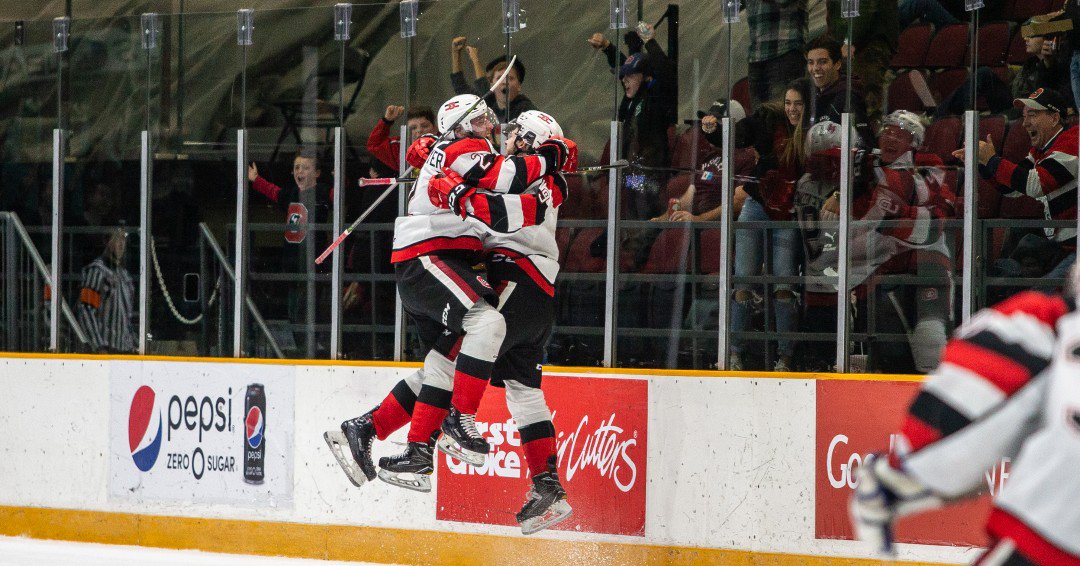 Man oh man Ottawa 67’s hockey is exciting! The 67’s return home from the road trip a cool 2-0 after beating both Guelph and Owen Sound in the shootout. The 67’s were not great in either of the games, but finding a way to win games is vital to a hockey team, so you have to like what you see from the 67’s through 2 games.

@Guelph: The 67’s got goals from Marco Rossi and Noel Hoefenmayer, and got 2 goals in the shootout courtesy of Austen Keating and Cam Tolnai. The 67’s conceded early in this one when Danny Zhilkin put a shot behind Cedrick Andree at the 1:30 mark of the first period. Ottawa answered back with one of their own at the 4:39 mark of the 2nd period when Rossi capped off a beauty passing play as he wired one above of the shoulder of Nico Daws, who made 40 saves on the night. Guelph would come back though, and it would be Pavel Gogolev in the right place at the right time when he found himself with a rebound as Andree sat on the ground scrambling. As that goal was being announced, Noel Hoefenmayer did what he does so often, scored on a booming slap shot from the point. The game stayed 2-2 and if not for the save of the year (yes, already) from Cedrick Andree, the 67’s would have lost this hockey game.

Ya, Andree did that. I don’t know how, but he did. This save quite literally saved the game for the 67’s.

Nothing happened in overtime and the game went to the shootout, I will let you watch it for yourself

It wasn’t super pretty, but the 67’s got it done. My prediction was Guelph wins in overtime, but I was wrong. I move to 0-1 in predictions.

@Owen Sound: The 67’s started this game on the back foot again after Stephan Machacek tipped in a beautiful centering pass from Ethan Burroughs, beating Cedrick Andree five hole on a play he didn’t stand much of a chance on. The 67’s answered back 4 minutes into the second period when Marco Rossi scored after a good heads up pass from Austen Keating. Ex 67 Carter Robinson put the Attack back in front when he scored on a break away, but that lead wouldn’t last long either. Austen Keating showing off his hand-eye coordination and beat Mack Guzda upstairs to tie the hockey game at 2. Both teams would add power play goals in the 3rd period, Daylon Groulx for Owen Sound, and Graeme Clarke for Ottawa. Overtime solved nothing, and it went to the shootout… again.

The 67’s got goals from Marco Rossi and Graeme Clarke to beat the Attack in the shootout.

@Kingston: The 67’s travel to Kingston to take on the young Frontenacs Friday. This will be their third consecutive away game. Kingston is a very interesting team this season with a player like Shane Wright they should be a good team next season for sure. The Fronts lost their first game of the season 4-1 to Oshawa and haven’t played since. Ottawa should be a better team than Kingston, but it is a concern that all of Ottawa’s offence has been coming from the Rossi-Keating-Clarke line. I think Ottawa is going to win this game by a final score of 5-3 and some of the depth players are going to have an impact on this game

Vs Peterborough: Finally! The 67’s home opener! The Pete’s are 1-1 to begin the season and have plenty of goal scoring talent as evident by their 12 goals in their first 2 games. The 67’s are going to have their hands full on Sunday with a Pete’s squad who seems to be a throne in the side of the 67’s every season. If the 67’s don’t get secondary scoring in this game, it could be a long day. It’s going to be nice to see the team back on the ice at TD Place for the first time since the game 5 loss in the OHL Finals, but I think the Pete’s are going to take this one by a score of 6-3.