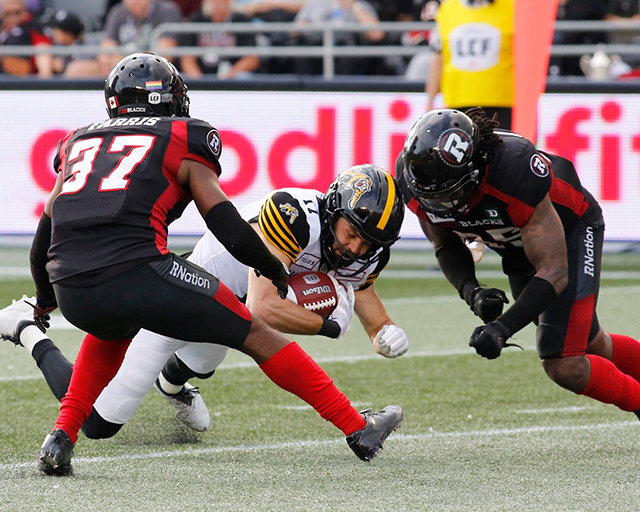 In his post-game press conference following Saturday’s loss to the Hamilton Tiger-Cats, REDBLACKS head coach Rick Campbell did not question the work ethic of his team.

“I know they’re working hard,” Campbell said. “Our job as coaches is to put players in the best possible position you can for success […] and we’re not going to stop at finding ways to whatever we can do to help guys out and put them in the positions where they can succeed.”

Success was in short supply at TD Place as the REDBLACKS fell 21-7 against the Tiger-Cats, their fourth straight loss at home and sixth in their last seven games overall. Ottawa is now 3-6 on the year.

Lewis Ward accounted for all seven points, connecting on field goals of 26 and 40 yards along with a single after a 42-yard miss, which ended his streak of 69 straight makes.

Without Ward’s heroics, Ottawa would have been shutout, as the offense failed to find the end zone on 18 possessions. Following Dominique Rhymes’ second-quarter touchdown catch against Edmonton last week, the REDBLACKS have now been held out of the end zone 30 consecutive drives.

“I’m not going to publicly criticize our people,” Campbell continued. “The thing that’s so frustrating to me […] is when you have a lot of good people that are working their butts off […] we just can’t get into any type of rhythm, so that part’s personally frustrating for me. I also know that’s not the name of the game–the name of the game’s not just to work hard, it’s to work hard and win.”

Perhaps it is time to start being critical, starting with the quarterback(s). Dominique Davis completed 20 of 40 passes for 238 yards, and besides a 47-yard pass to Rhymes, engineered just two other plays over 20 yards, both coming on 26-yard grabs by Caleb Holley and Brad Sinopoli.

Davis went an uninspiring 8-of-14 for 59 yards and began hearing boos from the hometown fans before Campbell pulled him in favor of Jonathon Jennings. Jennings led the REDBLACKS’ on their final two drives of the first half but fared no better, as just two of his six passes were caught for 31 yards.

Campbell went back to Davis for the second half, and Davis produced three two-and-outs along with a drive resulting in Ward’s first field goal of the game, cutting the Hamilton lead to 11-4.

Ottawa opened the fourth quarter with the ball at the Hamilton 51 and gained a whopping 19 yards before Ward hit from 40 to make it an 11-7 game.

The Tiger-Cats scored on their next possession, extending their lead to 18-7 after Jaelon Acklin’s 11-yard touchdown catch capped off an eight play, 75-yard drive.

A backwards pass from Davis to Holley was dropped on the first play of the ensuing drive, and as Holley stopped, thinking the play was dead, Frankie Williams alertly pounced on the ball at the Ottawa 17-yard line. Two plays later, Lirim Hajrullahu made a 21-yard field goal to make the score 21-7.

It’s hard to put much blame on the defence in what has become a common theme as of late–the ineptitude of the offence has put more pressure on the defence to make plays and keep the score close. Saturday the REDBLACKS gave up 433 yards but held Hamilton to 21 points; Antoine Pruneau and Anthony Cioffi each intercepted Dane Evans in the end zone, or it could have been more. The Tiger-Cats held the ball for nearly 35 minutes and gradually exerted their will in the second half as Ottawa’s defensive unit began to tire.

Once again Ottawa found themselves in a one-possession game in the fourth quarter. However, it never felt like Davis was going to engineer a comeback, partly due to his inability to find an open receiver, but mainly due to the play calling. To say it was mind-boggling would be an understatement. Several times in the first half with the team needing nine or ten yards for a first down, Davis found his receivers just six or seven yards away. There seemed to be no commitment to the run game, as Mossis Madu carried only nine times. Thirty-five of his 55 yards came on one play. Hamilton was more than content to put the pressure on Davis to make plays to beat them, and it just didn’t happen.

Next week the REDBLACKS are in Regina to take on the Roughriders, then have a bye in Week 12. At this point in the season, the REDBLACKS have nothing to play for more than pride.