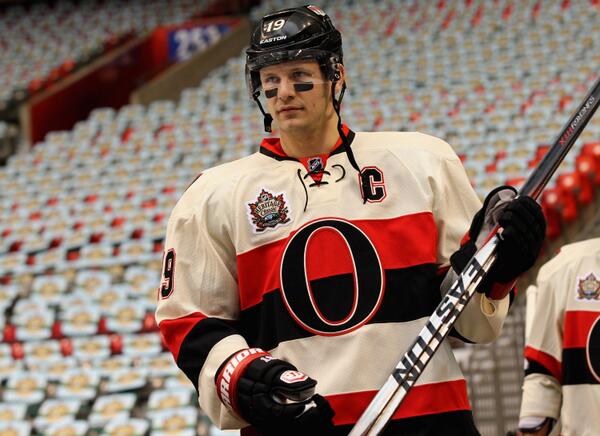 Jason Spezza is one of the most notable players in the modern day Ottawa Senators history. Spezza was the team’s second overall pick in the 2001 draft and was the #1 center on some of the best lineups in franchise history. He will forever be remembered by fans for centering the “pizza line” with Alfredsson and Heatley, as well as playing a huge role in the team reaching it’s only Stanley Cup Final appearance in 2007. He was also of course known for his infamous no look drop passes that would drive fans mad when unsuccessful. Spezza, to this day, remains one of the greatest centers in franchise history.

The Sens and Spezza parted ways in 2014 when he was traded to the Dallas Stars, where he has played ever since. This begs the question, what do the Senators have to do with Jason Spezza in the year 2019? Pierre LeBrun recently did an interview with Spezza, who happens to be a free agent this summer. Spezza said he is keeping the door open on possibly returning to Ottawa.

In the market that is Ottawa, this of course set Sens twitter and the fanbase ablaze with various hot takes on the idea. Many claimed that Spezza’s play has deteriorated to a point where he wouldn’t benefit the team enough to warrant offering him a contract this summer. A large number of others were very intrigued by the idea. People shared their reasoning for wanting Spezza back in Ottawa and made some very valuable arguments. “Ottawa is the most likely landing spot for Jason Spezza. The Matt Duchene trade left the Senators thin up the middle and adding Spezza would make sense for multiple reasons. He’d add invaluable experience and leadership to the young roster; he’s great in the faceoff circle, as was Duchene; and he wouldn’t command a top-six role, allowing the rebuilding Sens to keep giving big minutes to their developing prospects” says Sascha Paruk from SBD.

Spezza should have played his whole career in Ottawa rather than being traded for yet another pile of magic beans. Personally, seeing how the trade turned out for the team, I would have rather just kept Spezza instead of trading yet another captain and adding another dent in the armor of the team’s reputation. As previously mentioned, Spezza could provide great leadership to what figures to be a very young team yet again next season. I am on board with pursuing Jason Spezza this summer in free agency since the team will have a boat load of cap space and could use some veteran leadership. What do you think the team should do? Let us know down below in the comments or on our Twitter and Facebook.

One thought on “Should the Sens Sign Jason Spezza?”