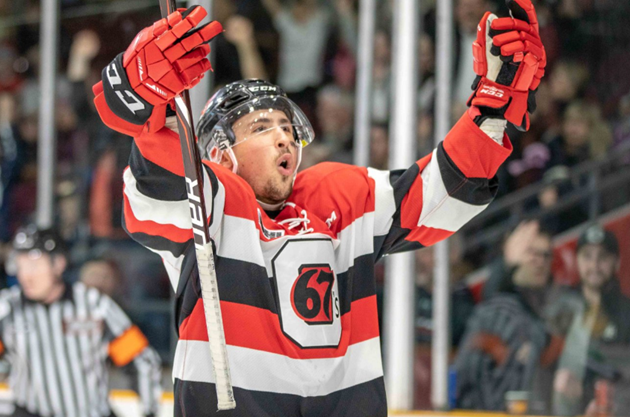 The 67’s are set to take on the Sudbury Wolves in the second round of the 2019 OHL playoffs. After a dominant series against the Hamilton Bulldogs, the 67’s hope to build off of that momentum and secure themselves a position in the conference finals. Sudbury is an up and coming team that finished 4th in the eastern conference with 43 wins this season after finishing dead last in the OHL last season winning just 17 games. That position provided the Wolves with the opportunity to select 2020 NHL entry draft eligible Quinton Byfield as the first pick in the OHL priority selection draft.  The Wolves’ fortunes have completely turned this season with a playoff birth and a first round sweep of Mississauga but now they’ll have to face the powerhouse Ottawa 67’s if they hope to continue this run they’ve been on.

Ottawa’s goal scorers had no trouble flexing their abilities in the first round against Hamilton scoring a total of 23 goals in the four game series. But Sudbury also had some good outings in their four game sweep of the Steelheads scoring a total of 17 goals. While Ottawa still has the depth advantage over the Wolves as they do with every other team in the east, Sudbury isn’t far behind in their ability to fill the net. Byfield leads the Wolves in playoff scoring with 7 points while Chmelevski and Chiodo are both tied with 7 points for Ottawa. These teams are not as mismatched as it might first seem, especially with how the Wolves have been playing in these playoffs.  It will be important for Ottawa not to underestimate Sudbury as they are much better than certain players might remember them being.

A really interesting element of this series comes from looking at the goaltenders of these two teams. When Ottawa traded for DiPietro at the deadline, the thought at the time was that this will put them over the top. This is the best goaltender in the league, the gem of the deadline, and whoever gets him will be virtually unstoppable. While the acquisition DiPietro hasn’t hurt the 67’s, he hasn’t been that elite backstop they were looking for either. The .897 save percentage across 17 regular season games is bad, but in the playoffs DiPietro’s posted a respectable .916 and he’s been good when he’s needed to be. Sudbury on the other hand has this fellow named Ukko-Pekka Luukkonen. Luukkonen was drafted in the second round in 2017 by the Sabres, and decided to move from his home country of Finland to Canada to play for the Wolves this season. Luukkonen has been lights out all year long. Across 53 regular season games he’s recorded 38 wins and a .920 save percentage. In the playoffs, Luukkonen had a whopping .946 save percentage in the series against the Steelheads making 139 saves in four games. Luukkonen has been playing some of the best hockey out of anybody in this years playoffs, and the 67’s need to be aware of this heading into a series against him. The biggest concern with this 67’s team in these playoffs is whether they’ll be able to adjust if they run into a team who can shut down their offence and score going the other way. Luukknonen provides the Wolves with the potential to shut down Ottawa’s offence, and if he plays at the level he’s capable of playing, it will up to the 67’s to get ready and really hunker down to play a lengthy hard fought series.

This series between the 67’s and Wolves is a tale between two team who probably weren’t supposed to be here. The 67’s were not supposed to be the best team in the league after getting swept in last years playoffs, and the Sudbury Wolves were not supposed to find themselves in the second round after winning a total of 17 games last season. Both teams are now coming off of first round sweeps as they battle for a berth in the conference finals. Both teams can score, but a hot goaltender can steal a series, so it will likely ultimately come down to which goaltender outperforms the other,

One thought on “Playoff Preview: Ottawa 67’s vs. Sudbury Wolves”