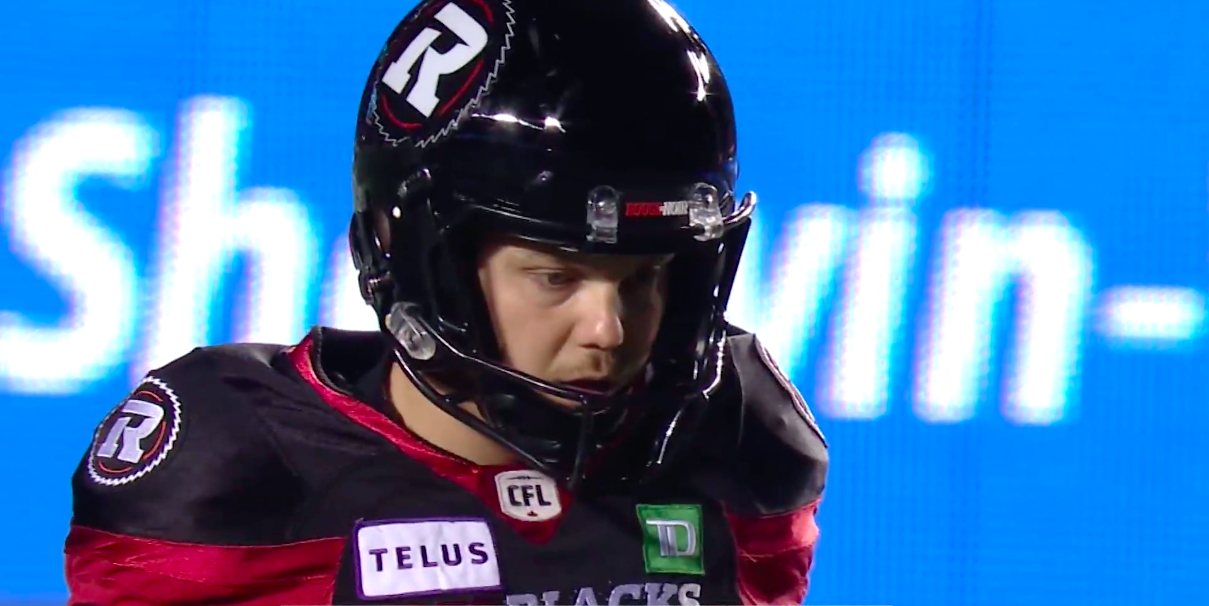 Lewis Ward kicked his 40th straight field goal on Friday night against the Blue Bombers. He now holds the all-time CFL record for consecutive field goals. The Redblacks went on to lose that game 40-32 in overtime.

There is a lot to digest with this game, so I’ll go in segments, starting with:

The Redblacks started strong in the first quarter with a quick touchdown and two point convert to gain an 8-3 lead. The second and third quarter would see Winnipeg take control. I stated in my game prediction that if the Redblacks could limit their penalties and shut down Winnipeg’s running game, they would have a good chance at winning.

They didn’t do those things.

The Redblacks took over 12 penalties in the game for a total of over 175 yards lost.

Ottawa played really well, and fought valiantly, but in the end, the multiple penalties exhausted an already thinly stretched defence to their breaking point.

And because of that, the defence wasn’t able to stop Winnipeg’s running game. Andrew Harris accumulated 132 rushing yards over the night. Compare that to the week 10 Redblacks victory, where Andrew Harris only had 72 yards.

Both teams played equally well, but the deciding factor was the penalties. The penalties cost the Redblacks the game in the long run.

But it’s not all doom and gloom…

Ward kicked 3 field goals on Friday, and broke the all-time CFL record for consecutive field goals, with his 40th straight.

Also, props to the pyro technicians for launching fireworks  for his 40th. That’s a nice gesture on their part.

The previous title holder was Rene Parades of the Calgary Stampeders, who kicked 39 in a row in 2013.

Ward has been nothing short (no pun intended) of amazing this season. He completed 43 of his 44 attempted field goals. He’s scored 141 total points, and has not missed since his first game.  Ward also had two games with 7 field goals. He wasn’t supposed to be this good! And yet…

He has only missed a single field goal the entire season. That’s good enough for a 97.7% success rate, the highest in the league (It’s been 100% since week 3).

Wasn’t he just a security guard at TD Place?

Ottawa is almost certain to make the playoffs this year. They would’ve clinched a spot with a win against Winnipeg. The real battle is for the first in the east. Ottawa has an 8-6 record. Hamilton is right behind with a 7-7 record.

Meanwhile, in the west division, things just got a whole lot interesting.

One of these three teams will not make the playoffs, either BC, Winnipeg, or Edmonton. It’s a very tight race that will change from week to week.

The Redblacks will play the Eskimos in Edmonton next week. Kickoff is Saturday at      5:00 PM.