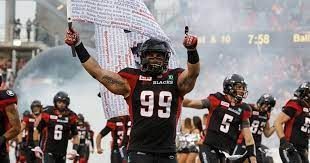 The Redblacks are not exactly as competitive in the East Division playoff race as we thought they would be ahead of the season, considering all the talent on their roster.

As a result of many injuries to their star players, including quarterback Jeremiah Masoli, some very conservative coaching and playcalling in a handful of games, their inability to end drives in touchdowns instead of field goals, some inconsistent offensive play, and a few blown leads have contributed to the Redblacks’ 1-7 record ahead of their 2nd bye.

The Redblacks have a bye this week before they host the Edmonton Elks on August 19.

Before that game, Redblacks’ General Manager Shawn Burke has to decide whether it’s best for the team to relieve Head Coach Paul LaPolice of his duties or to give him the rest of the season to work things out.

While LaPolice has made many questionable coaching decisions, including conservative play calling, time management issues, and personnel decisions like his unwillingness to switch Evans out when he struggles, among other things, have made fans irritable, the Redblacks’ struggles are not all to blame on LaPolice. The Redblacks have lost numerous key players on offense and defense for significant periods of time like Jeremiah Masoli, Frankie Griffin, and Abdul Kanneh among others. In addition, despite being 1-7, they were competitive in five of their seven losses.

Another issue the Redblacks face is who to start at quarterback. Since Masoli got injured in week 5 against the Saskatchewan Roughriders, Evans has been wildly inconsistent this season, struggling in some games but playing well in others. In five games, he has completed 79/126 passes 910 yards for four TDs and four INTs, which is much improved compared to last season, but still far from optimal numbers. He has also rushed 36 times for 163 yards and five TDs.

Nick Arbuckle has only played two games for the Redblacks since being traded from the Elks. While he has not been great, completing only 18/24 passes for 233 yards, zero TDs, and two INTs, he has been more consistent in the games he’s played compared to Evans. Paul LaPolice and company have to make a decision on who they want to start at quarterback against the Elks, who despite their 2-6 record are a good football team, especially on defense.

While the Redblacks sit at 1-7 fourth in the East Division and appear out of the playoffs, they are only one game back of the 2-6 Hamilton Tiger-Cats and 1.5 games back of the 3-6 Montreal Alouettes who are third and second respectively in the East Division. Also, seven of the Redblacks’ last 10 games are against Eastern Division opponents, which is a perfect opportunity to make up ground in the standings, provided the Redblacks make the right decision regarding their starting QB and play their best, mistake-free football.

The Redblacks know more about their roster than I do, but I suggest starting Arbuckle over Evans at least for now, as he has been more consistent than Evans as of late. However, both quarterbacks have to reduce the number of turnovers they cause and throw more TDs.

The Redblacks need to use their bye week to get their players on both sides of the ball fully healthy, fix their mistakes on offense, and modify their offensive game plan to ensure they are able to move the ball down the field consistently and end drives with touchdowns instead of field goals before a crucial double-header against the Elks.

Hopefully, the bye week is just what the doctor ordered to give the Redblacks enough rest and momentum to try and get their second win of the season. Whether they do, only time will tell; we’ll see on August 19.

One thought on “Redblacks’ mid-season analysis”