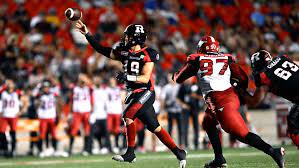 After an excellent performance from Caleb Evans and Jaelon Acklin last week to combine for 144 yards and a passing touchdown against the Argonauts, the entire Redblacks’ offense struggled to move the ball.

They struggled to score points, string together first downs and gain any momentum offensively against a very good Stampeders defense, that forced five turnovers against the Redblacks, including three interceptions, one of which was returned for a touchdown.

The Calgary Stampeders were coming into this game looking to rebound after suffering two consecutive losses against the Winnipeg Blue Bombers. They needed a win to keep pace with the 5-1 BC Lions who currently hold second place in the West division, for that all-important home-field advantage in the West semifinal playoff game.

The Stampeders also faced another challenge on their sideline. They would have to get a win against a Redblacks team with a lot of momentum after getting their first win of the season without their head coach Dave Dickenson, who was still in COVID-19 protocols. Mark Kilam, who has been with the Stampeders for 18 seasons, serving in many different capacities such as the strength and conditioning coach, defensive quality control coach, linebackers coach, special teams coordinator, and assistant head coach, served as an acting head coach for the first time in his career and his defense led the way in his first career CFL win as a head coach.

The Stampeders’ equipment manager George Hopkins also celebrated his 1,000th game with the team, spanning over 51 seasons. He’s been a part of six of Calgary’s eight Grey Cups.

Entering the game, Bo Levi Mitchell – who has seen a lot of success in his career against the Redblacks, with an 8-2-2 record – needed just 143 passing yards to break Henry Burris’ record for most passing yards in Stampeders’ history with 32,335. He started the game quietly, only having 22 passing yards in the first quarter, but he warmed up in the second quarter, throwing for 41 yards. Mitchell finished the game completing 13/27 passes for 137 yards and one interception and he sits only a mere seven passing yards back of breaking Burris’ record. Despite the loss, at least Mitchell didn’t break the record against Ottawa, a team Burris won a Grey Cup for.

Ahead of their game against the Stampeders, the Redblacks knew in order to get their second consecutive win against a very good team, Caleb Evans and Jaelon Acklin would need to have another MVP type of performance like they did against the Argos. Acklin leads the CFL in receiving yards with 687 entering week nine, which is an astonishing 98.2 yards per game. He has exceeded all expectations and been a massive part of why the Redblacks have been competitive in most of their losses despite having a record of 1-7. Acklin was blanketed by a tremendous Stampeders’ secondary and finished with only three catches for 28 yards. After the loss against the Stampeders, he fell to second in the league in receiving yards with 715, 27 behind Montreal’s Eugene Lewis, and his yards per game fell to 89.4, which is still impressive, but not the type of performance we’re used to seeing from him.

The Redblacks struggled mightily to move the ball and keep their drives alive with first downs. Both Caleb Evans and Nick Arbuckle struggled to find their rhythm, although Arbuckle, who finished 17/23, for 186 yards was able to provide more of a spark than Evans, who completed only 10/21 passes for 66 yards and struggled mightily all game long, never being able to find his footing. The Redblacks went three and out 11 times against the Stampeders and were shut out for over 55 minutes until Lewis Ward broke the shutout with a 25-yard field goal. It would be the only points they would score all game.

The current Redblacks team has never been shut out in a CFL game. They were four and a half minutes from being shut out tonight and that is a combination of poor offensive execution from the Redblacks and great defense, both upfront and in the secondary by the Stampeders. The Redblacks’ next lowest single-game point total – aside from only scoring one point in a 31-1 loss against the Winnipeg Blue Bombers on July 19, 2019 – was scoring only three points in a 48-3 loss against the Stampeders in week eight of the 2015 season.

Several miscommunications by the Redblacks’ offense led to many incompletions, turnovers, and multiple punts. Although Richie Leone – the best punter in the CFL, who leads the league in punt yards with 2,625 and averages 47.7 yards per punt on 55 punts this season, the second most yards per punt in the CFL only behind Lions’ punter Stefan Flintloft, who averages 48.9 yards per punt on 28 punts this season – has consistently pinned teams back deep inside their own territory, that is not enough to win football games, especially if your offense only score three points which was all the Redblacks could do against the Stampeders.

The Redblacks also turned it over five times, which hindered their offensive production. Three interceptions, one by Caleb Evans and two by Nick Arbuckle; one fumble lost in the red zone by Arbuckle, and one failed third down attempt on a QB draw by Arbuckle, were all contributing factors to the Redblacks’ loss.

Evans’ interception – his first in 90 passes or since he threw two in their week six loss to the Hamilton Tiger-Cats – was returned for a touchdown by Stampeders’ defensive back Titus Wall to give the Stampeders a 13-0 lead near the end of the second quarter. Wall recorded his second interception of the game with 1:45 left in the game after Nick Arbuckle underthrew his target to prevent the Redblacks from scoring a touchdown on a long drive and to preserve the Stampeders’ 17-3 lead. On the Redblacks’ next drive, Arbuckle’s pass to the endzone on third and goal was intercepted by Dionte Ruffin with under 10 seconds left to seal the win.

On defense, in order to win, the Redblacks needed to ensure they collapsed the pocket around Mitchell to speed up his reads, make him feel uncomfortable and force him to make mistakes. Cleyon Laing recorded the Redblacks’ only sack and third-string linebacker Shaheed Salmon – who replaced the injured Adam Auclair that started in place of Frankie Griffin who did not play against the Stampeders after being sidelined with an injury last week – recorded a crucial interception against Mitchell. However, the Redblacks could not score any points off their lone turnover, even with great field position inside Calgary’s 25-yard line after the interception because immense pressure from the Stampeders’ pass rush forced Evans to cough up the ball, which went backward over 20 yards before the Redblacks recovered their fumble and on third down, they were forced to punt it away. Lorenzo Mauldin, who is tied for the league lead in sacks with seven, made a few tackles, including a tackle for loss, but was less of a factor against a strong Stampeders’ offensive line than in previous games.

The Redblacks’ defense did enough to hold Mitchell to a modest 137-yard game, only completing 48 percent of his passes, but could not stop running back Dedrick Mills, who ran for 100 yards on 16 carries and recorded 32 yards on two receptions. Mills was the offensive hero for the Stampeders (Titus was the defensive hero) and his production on the ground and through the air was a huge factor in why the Stampeders improved to 5-2.

After tonight’s abysmal showing against the Stampeders, the Redblacks have now lost their last 7 home games and are a measly 2-18 at home since the 2019 season. While they’ve played pretty well in three of their four home losses, a 19-12 loss against the Blue Bombers, a 34-31 loss against the BC Lions, and a 40-33 against the Montreal Alouettes, they still couldn’t find themselves on the right side of the scoreboard in front of their home crowd, something that has eluded them for so long. The Redblacks have only beaten the Stampeders once since their 2016 Grey Cup win, in an exhilarating back and forth game that ended 32-28 in Ottawa’s favour on June 15, 2019.

The Redblacks allowed only 13 points the entire game last week against the Argonauts, while also scoring 13. They allowed 13 points in the first half against the Stampeders while scoring no points and struggling to move the ball on offense, a problem they didn’t face last week.

Lewis Ward scored all three of the Redblacks’ points with a 25-yard field goal and has now hit 144/162 career field goals (88.9 percent), the best by a current kicker in the CFL. Rene Paredes’ hit three of his four field goals, and one extra point after the pick-six accounting for 10 of the Stampeders’ 17 points. He has made 464/530 field goals in his career (87.5 percent) and is still chasing Lewis Ward’s CFL best field goal percentage.

Terry Williams has consistently recorded over 100 special teams yards in every game this season. He continued his dominance on special teams against Calgary, recording 48 yards on two kick returns and 67 yards on seven punt returns. He leads the league in punt return yards with 788, 246 yards above second place, and is fifth in the league in kick return yards with 260. To make up for Acklin’s off night, Nate Behar and Darvin Adams both stepped up, for 78 yards on seven catches and 70 yards on five catches respectively, but despite the nice stat lines, it wasn’t enough to give the Redblacks the victory.

Oddly enough, despite the loss, the Redblacks outgained the Stampeders in total yards by a 319-252 margin and outgained them in the passing game 252-149, but were outgained on the ground 103-67. It is strange that the Redblacks outgained their opponents in the passing game, especially considering how dreadful and inconsistent Evans was. Arbuckle was responsible for the majority of the Redblacks’ passing yards and despite leading his team on long drives down the field, he didn’t play much better than Evans because he too couldn’t find the endzone and he also threw multiple interceptions.

The 17-3 loss to the Stampeders, although not their biggest margin loss of the year – that honor belongs to the 28-13 loss to the Roughriders – it was by far the Redblacks’ worst loss of the season as they trailed from essentially the beginning of the game. Even though the score was only 3-0 in favour of the Stampeders after the first quarter and the stats were similar, the Redblacks were never competitive in this game and never had a chance of winning as a result of their abysmal offensive performance.

One thought on “Redblacks’ offense struggles mightily against the Stampeders”