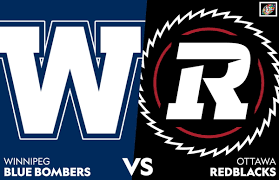 A crucial stop on defense late in the game for the Winnipeg Blue Bombers led to the game-winning drive where Zach Collaros connected with wide receiver Dalton Schoen for a 27-yard touchdown to complete the sweep of the Redblacks and improve to 2-0 on the season.

The Redblacks, meanwhile, fall to 0-2 on the season after two competitive games against back-to-back defending Grey Cup champions and the best team in the CFL, both of which resulted in close losses by a combined total of only nine points. The Redblacks have seen significant improvement on offense and defense compared to last season.

Jeremiah Masoli threw for over 330 yards in both games and has been moving the ball down the field extremely effectively, relying on the run game, intermediate passing game, and especially on the deep ball which he loves so much. The Redblacks just have to learn how to end drives with touchdowns, not field goals, and how to close out games, which is tough for a young team, but necessary if they want to be considered playoff contenders.

The Redblacks’ offense started the game strong, playing at a much faster pace than the Bombers’ offense. Masoli used the deep ball early and often and was quite effective in doing so. Several of the Redblacks’ receivers made a handful of phenomenal catches, including Nate Behar, RJ Harris, and Justin Hardy.

The Redblacks’ opening drive was very well executed and utilized a nice mix of running back Devonte Williams and Masoli’s arm. It led to a 26-yard field goal from Lewis Ward after they were stopped in the red zone and the Redblacks got on the board first.

The Redblacks’ defense started the game extremely well too. They did not surrender an opening drive touchdown in their home opener. Instead, they forced two and outs on the Blue Bombers’ first two possessions. Quite impressive for a young defense to do this against the best offense in the league.

On the Blue Bombers’ next possession, the Redblacks appeared to get another two and out, but an illegal contact against the Redblacks’ defense gave the Bombers’ their first first down of the game. Collaros appeared to connect downfield with one of his receivers, but a holding penalty negated that gain and forced another punt.

The Redblacks dominated the trenches. Their offensive line did a great job protecting Masoli and opening up holes for their running game. They didn’t give up many sacks either. Their defensive line consistently pressured Collaros, forcing him to throw the ball away or throw it into heavy coverage. The defensive line was relentless in their pursuit of Collaros, forcing the Bombers’ offensive line to take multiple holding penalties. They forced a ton of pressure and numerous sacks against Collaros.

On the Redblacks’ next drive, Masoli effectively used the ground game to open up passing lanes downfield. Masoli connected on a beautiful 50-yard pass to former Bombers’ receiver Darvin Adams to set up the Redblacks inside the red zone. After taking a huge 18-yard sack on first down, the Redblacks’ drive stalled, and once again they could not finish their drive with a touchdown.

Lewis Ward hit a 37 field goal to extend the Redblacks’ lead to 6-1 four minutes into the second quarter. Ward hit two of his three field goals to that point after missing a 38-yard field goal late in the first quarter after the Redblacks were stopped inside the Bombers’ 30-yard line for the second time.

On the Blue Bombers’ next drive, they were moving the ball downfield effectively all the way to inside the Redblacks’ 40-yard line until Monshadrik Hunter recorded an interception after Collaros’ pass was tipped up in the air by his own receiver. The Redblacks couldn’t do anything with the turnover and were forced to punt. Capitalizing on opponents’ turnovers is another thing the Redblacks have to improve on as soon as possible.

The Redblacks would close out the half with a drive that took four minutes. The highlight of the drive was a huge 16-yard catch by Adams on 2nd and 17 which led to a 3rd & inches conversion on a QB sneak at midfield to keep Ottawa’s drive alive. A few more nice catches from Darvin Adams, Justin Hardy, and Nate Behar would set up the Redblacks inside the Bombers’ 25-yard line, but flawless coverage from the Bombers’ secondary didn’t allow the Redblacks to advance any further. Lewis Ward hit his third field goal on four attempts, from 33 yards out.

The Redblacks led 9-1 with 1:30 min left in the first half. Their defense to that point was shutting down the Bombers’ league-best offense. Until Collaros led his team on a long drive down the field, connecting multiple times with Greg Ellingson, Rasheed Bailey, and Dalton Schoen before finding Ellingson wide open for a 13-yard TD (his second in two weeks against the Redblacks) with 15 seconds left in the half. Their two-point try was no good, the Reblacks took a 9-7 lead into the locker room, but appeared to be losing some momentum.

The Bombers’ offense moved the ball extremely well in the third quarter. They were the better team on both sides of the ball immediately after halftime. Mike O’Shea’s squad made more adjustments at halftime than Paul LaPolice’s side and it showed. The Bombers’ had two consecutive long, but efficient and meticulous drives down the field which resulted in two field goals on back-to-back possessions to take a 13-9 lead. Collaros really found his groove during these two drives and the Bombers’ offensive line and defensive line improved drastically after halftime. Their defensive line forced a ton of pressure and multiple sacks against Masoli. They forced him to move outside the pocket to make throws and made him feel uncomfortable in the pocket.

The Redblacks responded well by driving all the way down the field all the way to the fringes of the red zone after multiple catches from Nate Behar and Jaelon Acklin.  They were in a position to score a touchdown to take a 16-13 lead, but a sack and an incomplete pass to the endzone on 2nd down set up a 38-yard field goal for Ward, who hit his 4th field goal in 5 attempts and cut the Bombers’ lead to 13-12.

Early in the fourth quarter, the Redblacks appeared to gain some momentum back. After getting a stop on defense, forcing the Bombers’ to punt, they drove all the way down the field to the Bombers’ 23-yard line. Facing a third down and inches, the Redblacks elected to go for it. They could have taken a field goal to take a 15-13 lead, but given all 12 of their points came from Ward already, LaPolice decided to go for it on third down to take more time off the clock and try and find the endzone for the first time in the game. The Redblacks appeared to have converted the 3rd down after a QB sneak from Caleb Evans, but the referees called them short and the Redblacks turned the ball over on downs.

On the Bombers’ ensuing drive, Ellingson made a 30-yard catch along the sideline to set the Bombers up around midfield. The Bombers continued to move the ball methodically down the field. With just over 5:15 left in the game, Collaros found Schoen for a 27-yard touchdown to cap off a drive that took over six minutes and to take a 19-12 lead after missing the extra point.

The Redblacks drove all the way down the field again, making it inside the red zone for the fifth time in the game. They once again faced a third down and went for it. They could not convert the third-down play and turned the ball over for the second time. With just under two minutes left, the Redblacks’ defense needed a quick stop to get the ball back and another chance to try to tie the game. They did just that and forced the two & out. However, on the punt, the Redblacks were charged with a roughing the kicker penalty which gave the Bombers’ an automatic first down and sent them into victory formation.

However, they have a lot of work to do on both sides of the ball including finishing drives with touchdowns instead of field goals, closing out games better, and reducing their turnovers. Paul LaPolice’s goal during Ottawa’s bye in week three is to continue developing team chemistry

working on a sound red zone offense to end drives with touchdowns, not field goals, and working on closing out games better. The Redblacks have the potential to win, they just have to put all the pieces together.

Ottawa returns to action in week four at home to the BC Lions and Canadian QB Nathan Rourke, who has had an amazing season so far. The Blue Bombers will host the Hamilton Tiger-Cats in week three. Even after two losses to open the year, the Redblacks are tied for second in the East division with the Montreal Alouettes and the Tiger-Cats who all have an 0-2 record. The Toronto Argonauts lead the division with a 1-0 record. Making the playoffs this season is still a very real possibility for the Redblacks.