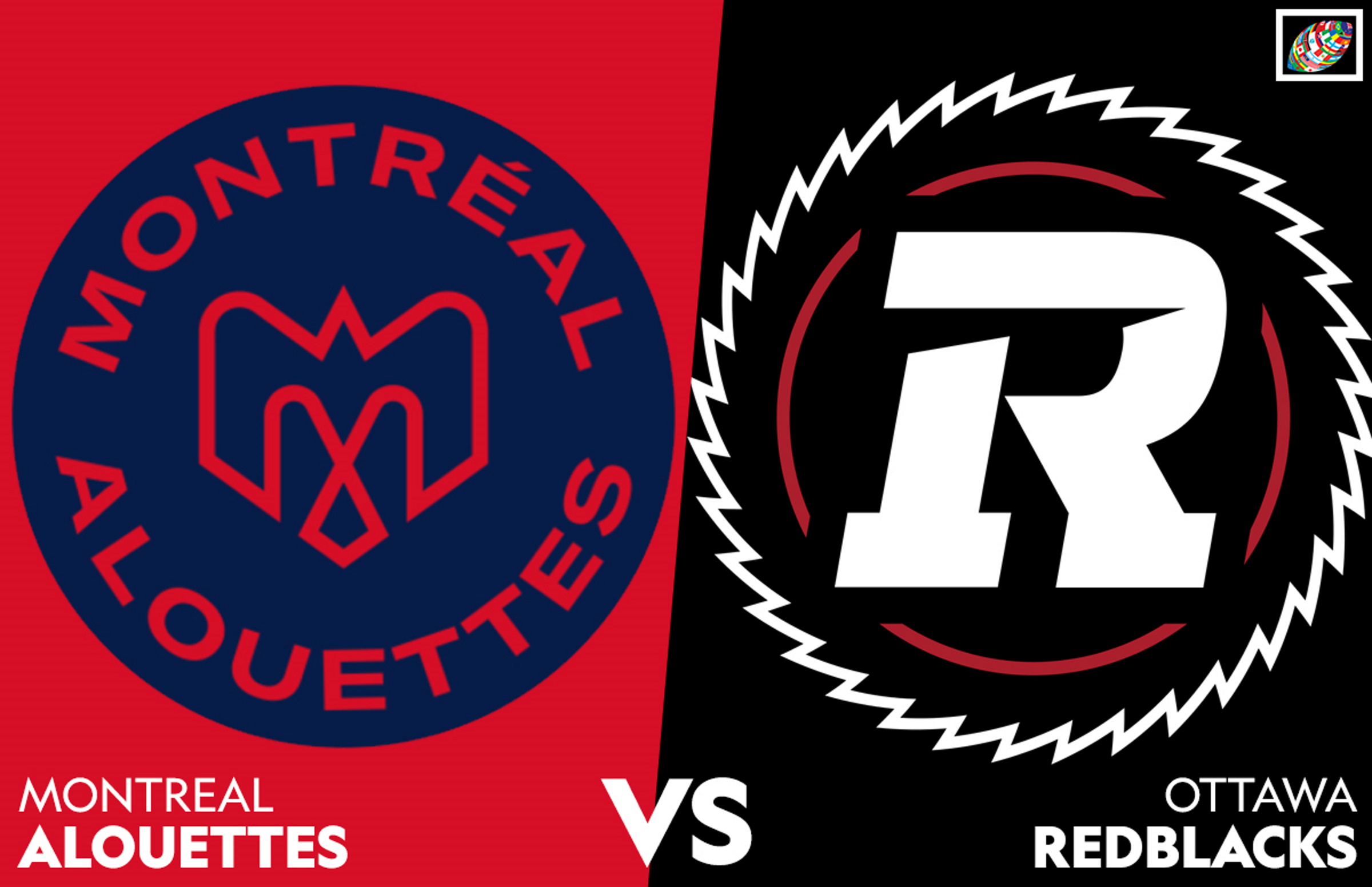 In a thrilling, defensive battle to close out the CFL preseason, the Montreal Alouettes scored the game-winning TD with less than a minute to go to win 27-26 and complete the comeback over the visiting Ottawa Redblacks.

The Redblacks started out the game playing extremely well on defense. Their young, aggressive and talented secondary forced four interceptions, three of them came off the arm of Alouettes’ starting QB Vernon Adams, including two from young cornerback Hakeem Bailey.

The Alouettes rolled out the majority of their starters, especially on offense but the Redblacks gave the majority of their starters the night off and instead played many of their second or third stringers and rookies to continue evaluating them. Alonso Addae had a great preseason debut and several wide receivers had great games like R.J Harris (4 receptions, 59 yards), Brandon Arconado (1 reception, 47 yards), and former Carleton Raven Keaton Bruggeling (2 receptions, 20 yards).

Quarterback Jeremiah Masoli, running back William Powell, receivers Jaelon Acklin, Darvin Adams, and Nate Behar did not play tonight against the Alouettes. A handful of defensive starters also got the night to rest.

The Alouettes got on the board first midway through the first quarter and wasted no time in doing so. Adams Jr. played in his first game since an injury in October 2021 and looked great. He used his arms and his legs to lead his offense downfield, including converting on a few third downs to keep the drive alive. He completed four of his six passes on the opening drive including an 18-yard pass to Kaion Julien-Grant, who made a fantastic grab on the play to set up a first and goal. Adams capped the drive using his feet, taking it in himself for a rushing TD, showing the world he is one of the best dual-threat QBs in the league.

Following the two field goals to make it 10-3 for the Alouettes, rookie defensive back Daniel Valente made his presence felt with a crucial interception to stop an Alouettes’ offense that was picking up momentum after a long drive. His interception gave the Redblacks the ball in scoring position at the Alouettes’ 25-yard line after the return, however, on the very next play Caleb Evans’ pass to the endzone intended for B.J. Cunningham was intercepted by Wesley Sutton – who made a phenomenal play on the ball in mid-air – and the score remained 10-3 after the first quarter.

After the first quarter, the Redblacks had only one first down compared to nine from the Alouettes and they only recorded 25 net yards of offense compared to 113 from the Alouettes, which explains why they only had the ball for four of the 15 minutes. The Redbacks played most of their backups which explains the stat discrepancy, but they didn’t give up, especially their young defense, where many guys are fighting for roster spots.

The Redblacks’ defense really started heating up early in the second quarter. On the first play of the second quarter, defensive back Hakeem Bailey made a beautiful read on the ball and jumped a route perfectly for his first interception, which set up the Redblacks’ offense on their own 40. The Redblacks would drive down the field thanks to a nice 20-yard catch by Shaq Johnson and a few smart passes and runs by Caleb Evans which led to a 32- yard field goal. The Redblacks would cut the lead to 10-6 and were gaining some momentum back.

On the very first play of the next Alouettes’ drive, Vernon Adams’ pass deflected off an Alouettes’ receiver and fell right into the hands of 2021 second-round draft pick, versatile free safety Alonso Addae. After his return, the Redblacks had the ball at the Alouettes’ 35-yard line with the chance to take the lead.

The Redblacks were unable to gain a first down and as a result, they did not capitalize on their defense’s effort with a touchdown. Jose Maltos hit his third field goal of the night, from 37 yards out to cit the Alouettes’ lead to 10-9 with under eight minutes to go in the first half. All three of his field goals were from over 30 yards out.

After his third interception, Adams Jr. would be replaced by Trevor Harris at quarterback. Adams Jr. ended his night by completing 6/12 passes for 69 yards, three INTs, and a scoring a rushing TD. Like Adams Jr., Trevor Harris wasn’t able to solve the red-hot Redblacks’ defense as his first pass that was nowhere near his intended receiver was intercepted by Hakeem Bailey. Bailey’s second interception of the night gave the Redblacks the ball at Montreal’s 24-yard line. The Redblacks’ defense forced three interceptions in one quarter and four in a quarter and a half which is something you don’t see every day and even more incredible when it’s done by a defense consisting of mostly second-team players and rookies trying to prove themselves.

The Redblacks drove inside the Alouettes’ 15-yard line to the 11 but a nice defensive stand by the Alouettes forced the Redblacks to kick another field goal. Maltos drilled his fourth of the evening from 18 yards out and stayed perfect. The Redblacks took their first lead of the game with Maltos’ fourth field goal and led 12-10 with 4:45 left in the first half.

Trevor Harris would lead the Alouettes on a long drive down the field before Addae delivered a huge hit on second down to force an incompletion and a punt. The Alouettes’ defense would get a quick three and out and Harris would lead a drive starting from the Redblacks’ 52-yard line thanks to a 32 yard gain from Cole Spieker which set up a 27-yard field goal by Als’ rookie kicker Matt Mengal to give the Als a 13-12 lead at the half.

Caleb Evans, who played every offensive snap in the first half would be done for the night. He finished 5/13 for 65 yards, one interception, and 19 rush yards on three carries.

Tyrie Adams would start the second half under center for the Redblacks and would engineer a long drive all the way to the Alouettes’ 20-yard line, before linebacker Tyrell Richards, the first overall pick in the 2022 draft who flew by the Redblacks’ young offensive line on his way to force a strip-sack to cause a fumble and give the Alouettes the ball back. Despite the turnover, the Redblacks’ defense stayed stout, forcing Mengal to hit his second field goal of the night to regain a four-point lead.

Adams rebounded nicely on his next drive and he kept his composure in the pocket, scanning the field effectively and making the correct decisions with his arms and his legs. A defensive breakdown by the Alouettes’ defense left Redblacks’ wide receiver Brandon Arcanado wide open. Adams placed a perfect ball, hitting Arcanado in stride for a clutch 47-yard reception which set the Redblacks up inside the Als’ 10-yard line. The Redblacks were unable to punch it in, but Maltos would hit an 18-yard field goal, his fifth of the night, to cut the Als’ lead to 16-15.

A punt single would give the Alouettes a 17-15 lead heading into the fourth quarter. After a well-played third quarter, Adams was determined to win the game for the Redblacks and his play mirrored his determination. After leading the Redblacks on a long, methodical drive down the field, completing some key passes to receivers while utilizing the running game effectively, Adams capped off the drive with an incredible 36-yard touchdown run on a QB draw, showing off his speed, athleticism, and agility. The offensive line got up the field phenomenally to block defenders and open up a running lane for Adams on the run. The Redblacks made the extra point and led 22-17 with 11:45 left in Q4, their first lead since the second quarter.

The Redblacks continued to play great defense and held their five-point lead until midway through the fourth quarter when Ottawa scored a rouge off Gabriel Ballinas’ punt to take a six-point lead. With under five minutes to go, third-string QB David Moore connected on a deep ball to veteran receiver R.J. Harris on a 46-yard pass which set up a phenomenal TD run from runningback Brandon Marshall. However, Marshall’s knee was ruled to be down at the five-yard line and the Redblacks could not finish another drive in the endzone and settled for a field goal.

The Alouettes responded with a field goal of their own to cut the Redblacks’ lead to 26-20 with 1:50 left. Alouettes’ linebacker/edge rusher Brock Gowanlock recorded two sacks on his team’s last two defensive drives to help secure the win. He also strip-sacked Tyrie Adams in the third quarter and returned the fumble 52 yards. He played very well all night and was an integral part of the Als’ victory.

After the Redblacks’ defense had played so well for most of the night, it was a defensive miscommunication that allowed Alouettes’ fourth-string QB Davis Alexander to complete a 53-yard pass to a wide-open Fabian Guerra to put the Als on Ottawa’s two-yard line. On the very next play, running back Ryth-Jean Giraud scampered in for a two-yard TD to leave his mark on the game. The Als’ had a 27-26 lead with 0:28 left and the Redblacks couldn’t respond.

Despite the loss, there is a lot to be excited about heading into the season, including the talented defense, the depth in the secondary, and an offense with so depth and talent at all the skill positions. The Redblacks begin their season on the road against the defending back-to-back Grey Cup-winning Winnipeg Blue Bombers and the Alouettes are on the road against the Calgary Stampeders. It should be a great season of football in the nation’s capital.