Redblacks win a thriller against their provincial rivals, open the preseason in style 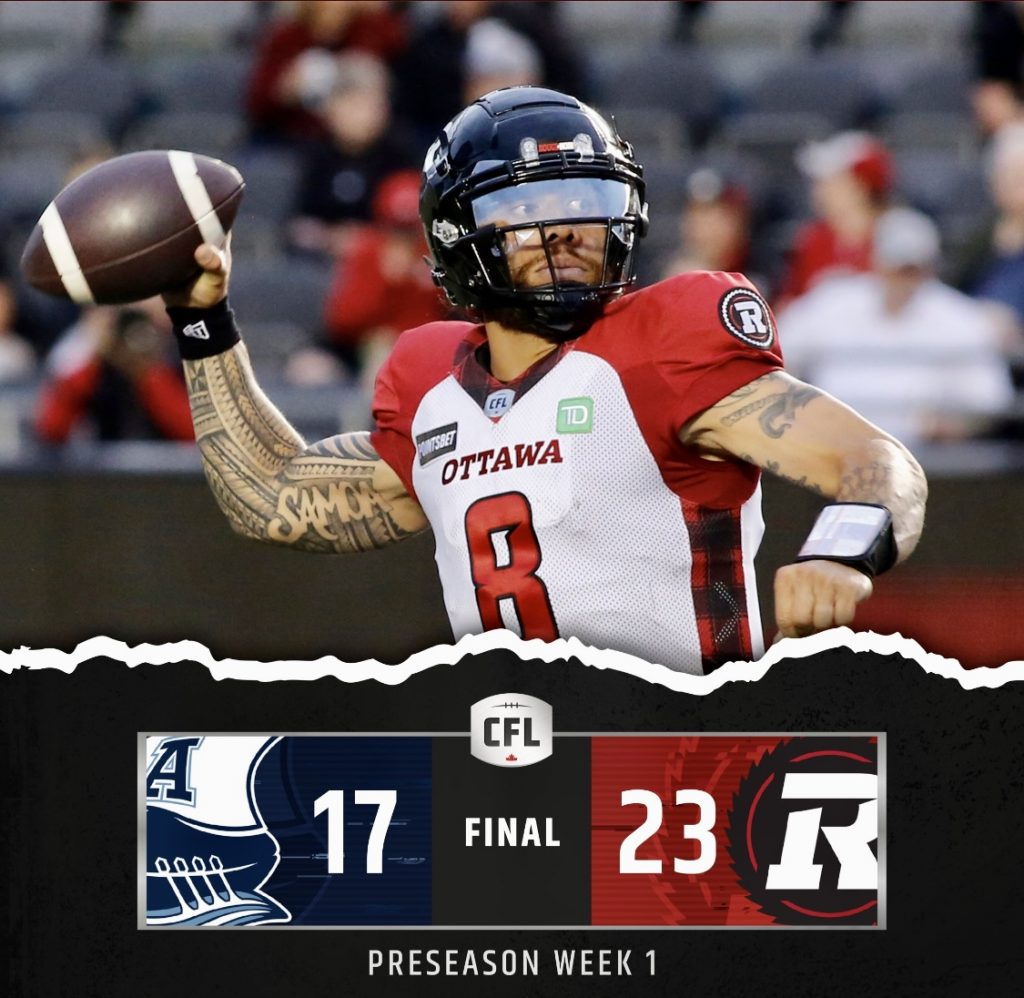 After a disappointing season in 2021, finishing with a record of 3-11, the Ottawa Redblacks showed glimpses of how good they can be in 2022 with a thrilling 23-17 comeback win over the Toronto Argonauts in their preseason opener.

The first half was a low-scoring, back and forth, grueling defensive battle as both offenses were trying to figure out their opponents’ defensive schemes while trying to work out the kinks in their own playbook after a shortened training camp as a result of ongoing CBA negotiations.

The only point in the first quarter came from a punt by Redblacks’ punter Jose Maltos that the Argos’ punt return man could not bring out of his endzone, resulting in a rouge.

The Redblacks’ defense played extremely well in the first half, limiting the Argonauts to only three points. They not only kept the Argonauts off the board until the last play of the first half, but they were also able to pressure the QB and force turnovers, two things they struggled to do consistently in 2021. They forced two interceptions – one to seal the victory – a fumble and recorded two sacks.

Late in the first quarter, the Argonauts strung together a few huge plays and seemed to have all the momentum. They were in the midst of an extended drive up the field that took several minutes off the clock until the Redblacks’ defense stole the momentum back. Abdul Kanneh, who had a breakout season last year, broke up a deep pass down the middle from Argos’ QB Anthonio Pipkin which was intercepted by veteran linebacker Avery Williams.

It took a while, but the Redblacks’ offense really got going in the second quarter with their first touchdown of the 2022 season. During that drive, QB Jeremiah Masoli showed why he is a CFL all-star with his arms and his legs. After connecting with wide receiver Ryan Davis, who made a series of impressive catches to move the ball down the field, Masoli rolled right to avoid a sack and connected with former Hamilton Tiger-Cats teammate Jaelon Acklin – who made a phenomenal toe-tap catch on the sideline – for an incredible eight-yard touchdown and the Redblacks took a 7-0 lead after Lewis Ward missed the convert.

Masoli’s night would end shortly after the touchdown pass, but quarterback Caleb Evans showed flashes of brilliance by making a few brilliant passes with his high field awareness and football IQ and by using his agility and athleticism to avoid sacks and extend the play to give his receivers more time to get open, something the Redblacks’ QB duo of Matt Nichols and Dominique Davis couldn’t do well last season, but both Evans and Masoli excel at doing. Caleb Evans proved to be a reliable backup and short-yardage guy for Masoli this season.

However, Caleb Evans’ interception late in the second quarter led to an Argos’ field goal to cut the Redblacks’ lead to 7-3 at the half.

The Argonauts’ offense really found its groove in the second half. Pipkin’s night finished in the middle of the second quarter after he completed 7 of his 9 passes for 60 yards and one interception. Former Denver Broncos’ QB Chad Kelly got the Argos’ offense going by moving the ball downfield in the second and third quarters and efficiently gained first downs with his arms and legs.

The third quarter was a defensive battle that finished scoreless. The Redblacks’ defense dropped two potential interceptions that would have ended two Argonauts’ drives. Instead, the Argos were able to gain some serious momentum from those drives which would lead to a touchdown and their defense shut down the Redblacks’ run game and passing game effectively.

Kelly and running back Javon Leake were crucial in the Argos’ extended drive at the end of the third quarter – which extended into the fourth quarter – that resulted in a Leake rushing TD that gave the Argos their first touchdown of the season and a 10-7 lead, their first lead of the game.

Things only got worse for the Redblacks from there. Third-string QB Tyrie Adams looked very uncomfortable behind Ottawa’s offensive line upon entering the game and missed on a few textbook throws before underthrowing one of his receivers, a costly mistake that led to a 59-yard pick-six which extended the Argos’ lead to 17-7.

However, Adams rebounded nicely as the fourth quarter progressed and got into more of a consistent rhythm. He finished for 68 yards and one TD, completing 6 of his 9 passes.

A mix of strong downfield running from Jackson Bennett and key receptions from Bennett and former Carleton Raven receiver Keaton Bruggeling, who recorded two clutch catches for 33 yards (which may have increased his chances of making the final roster) led the Redblacks all the way down the field before Adams found receiver R.J. Harris open on a screen pass who made a defender miss before scampering in for an 11-yard TD to cut the Argos’ lead to 17-14 after Ward nailed the extra point.

The Redblacks’ defense needed to be perfect and prevent the Argos from scoring any more points for the remainder of the game to increase their odds of winning. They did just that.

The Redblacks forced a two-and-out on defense and got the ball back on their own 44 with 2:41 remaining. Despite not being able to capitalize on their offensive drive, the Redblacks’ defense held strong again and were able to force another two-and-out by applying immense pressure to the Argos’ QB. The Redblacks drove to around mid-field before pinning the Argos deep in their own territory with a booming punt.

Deep in their own territory, the Argos elected to take an intentional safety to cut the deficit to one point. They trailed 17-16 with possession and 1:15 left to play. The decision to take the safety to gain leverage in the field position battle didn’t work out well for the Argonauts.

The Redblacks drove all the way down the field, highlighted by an explosive 40-yard rush from Bennett (he had 62 rush yards on the day) down to the Argos’ three-yard line. The drive was capped off by a one-yard QB sneak from Adams after a defensive pass interference penalty in the endzone gave the Redblacks a first and goal from the one-yard line.

Lewis Ward’s extra point pushed the lead to six points and the Redblacks led 23-17 with 0:20 seconds left. After a facemask penalty gave the Argos a first down around midfield, a last-second hail mary attempt from Argos’ third-string QB Austin Simmons was intercepted by Trumaine Washington to seal the game.

Even though Masoli looked great, completing 8 of 11 passes for 105 yards and a TD, Adams was the hero for the Redblacks, with one passing TD and one rushing TD en route to 16 unanswered points in the last five minutes of the fourth quarter for the Redblacks’ to complete the comeback.

Honorable mentions for player of the game go to R.J. Harris, who led the Redblacks in receiving yards with 62 and had a receiving TD; Terrance Smith who had five tackles; Davon Coleman who had a sack and a forced fumble; and Avery Williams and Trumaine Washington who both had interceptions. They all had great games.

The Redblacks didn’t play a perfect game against the Argos, but there were a lot of positives to take away from the win and the Redblacks will only continue to improve as the season goes on. There’s a lot to be excited about in Ottawa.

The Redblacks look to continue their preseason on a strong note when they visit the Montreal Alouettes on Friday, June 3rd. The Argos will host the Hamilton Tiger-Cats on the same day before the regular season gets underway on June 9.

One thought on “Redblacks win a thriller against their provincial rivals, open the preseason in style”