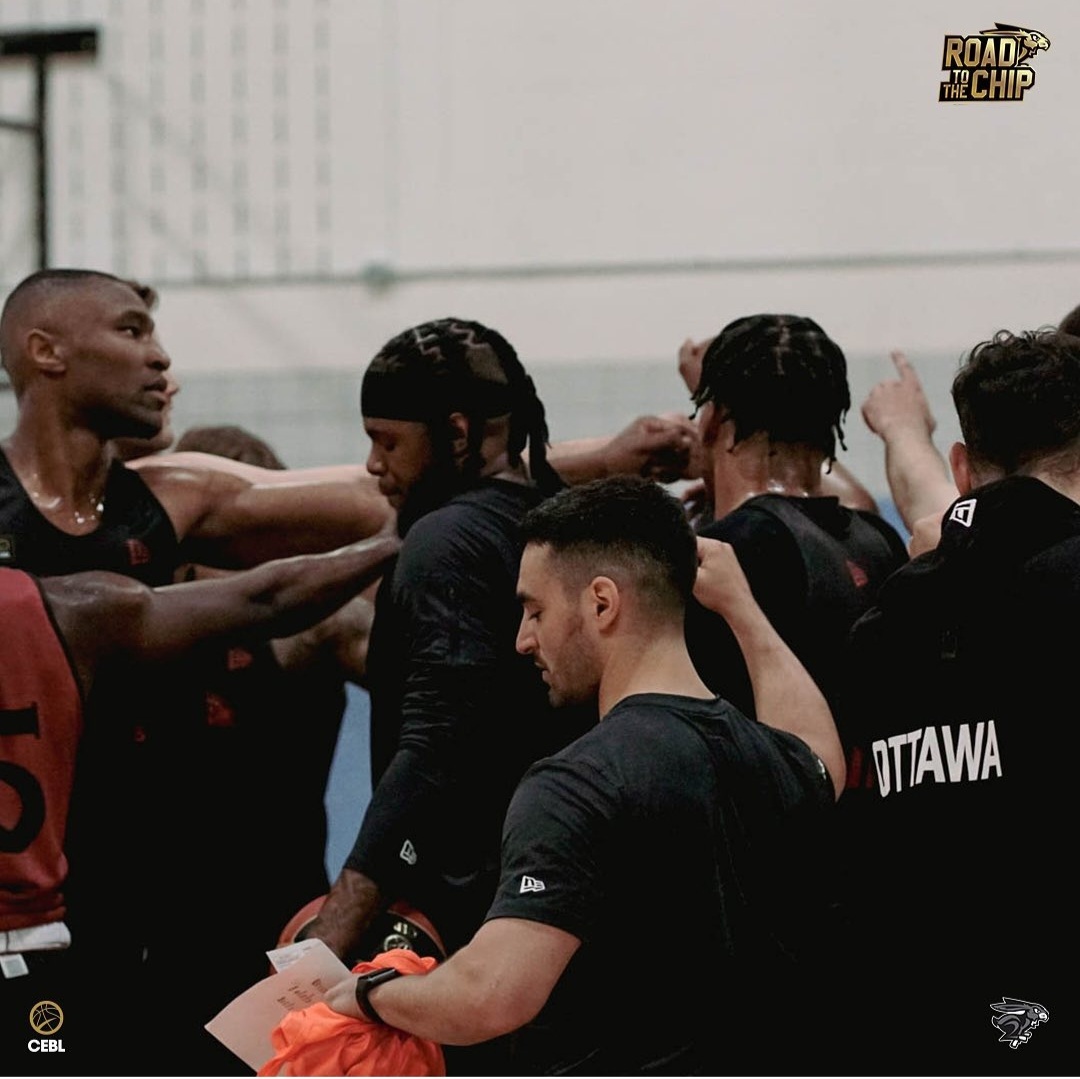 After a long eight months, the Ottawa BlackJacks are finally back on the court.

Sure, it may not be the same BlackJacks squad that we last saw. And the only court they can be on right now technically isn’t even theirs. But that hasn’t wiped away the smiles from a group of young, hungry competitors who are determined to hoist a championship trophy on their real home court.

The team assembled for the first time on Monday in the gymnasium at La Cité College. The school is set to host the majority of the team’s practices this year after the team had the luxury of setting up shop at TD Arena last year. However, the lifting of pandemic restrictions means that more concerts and events are coming through town, and the court will have to be routinely pulled up with the exception of game days.

While the move may be an inconvenience to some of those covering the team (it’s me), the players are just happy to get back into the groove of a basketball season. That rings especially true for the young players who are set to begin their professional careers this summer.

“I think it will be a great experience,” said Maxime Boursiquot, an Ottawa University grad who also has NCAA experience and lives mere steps away from the new practice facility. “We’re in my home city, I live at home with my parents and my brother, I have everything that I need. So I think for me, it’s just to come out here and do what I do best and just enjoy the summer.”

Boursiquot is one of three Ottawa natives who have the opportunity to play professional basketball in their hometown. And as it turns out, there’s a pretty tight connection between two of them.

“Back in the day with Ottawa Next Level, I played with (Borsiquot) a lot,” said Corey Johnson, who grew up in the Capital before pursuing his basketball career and education at Harvard. “I played alongside him, and my mom coached him. So, I was always watching him play and stuff like that. And we also played against each other in high school; he was at Immaculata, I was at West Carleton, so we had a few good rivalry games over there too. It’s going to be fun to play with him. Definitely full circle, for sure.”

Of course, the majority of players are not locals. They are professionals who have spent the past number of years in foreign cities and countries, working towards their basketball dreams. For a league that runs in what is typically considered the basketball offseason, it’s not always easy convincing said professionals to spend what little precious family time they have continuing to play ball. But to hear some of the newest BlackJacks tell it, the coaching staff and front office made it a relatively easy decision.

“They showed a lot of interest, and at this point in my career, you want to go where you are wanted,” said Walt Lemon Jr., a veteran of the game with over 200 G-League games under his belt and 11 appearances in the NBA. “I felt that from everybody: the president, the GM and even the coach. At this point I’m just looking to go where I can play more games and I’m valued.”

“Just talking to their coaching staff, it just felt family oriented,” former Hamilton Honey Badger Cody John said. “It just felt like the right move. So I’m excited to be here, for sure.”

Big man Chad Posthumus echoed his new teammates sentiments. He said that love and the atmosphere the front office creates around the team played a part big in his re-signing after having a breakout playoff performance for the team last summer.

“Just what I experienced last year, just the organization, the family that everyone is here, it’s outstanding,” Posthumus said. “It’s the top of the league and it’s great to call that home for a whole season.”

Another major draw to the team and the league has been the success that players have had after appearing in the CEBL. This past NBA season saw five players – Javin Delaurier, Lindell Wigginton, Xavier Sneed, and three-time league MVP Xavier Moon – join the league after appearing in the CEBL the summer prior. That’s not even mentioning the numerous players who went on to sign contracts in some of the biggest leagues outside of the Association.

That has definitely not gone unnoticed in the relatively tight basketball world, and more and more players from high level leagues are looking to find a spot on one of Canada’s teams during the summer.

“I think everyone in the world’s goal is to play in the NBA, and to see certain guys that played in this league previously and then the next season they get the opportunity to play in the NBA, that’s going to attract more talent,” Lemon Jr. said. “For me, that was a real big decision in me coming here, seeing guys get the opportunity out of this.”

“(Players are) seeing it as a legitimate option to move up and move up those ranks,” Posthumus added. “You’re getting legitimate games with really good players across the entire board and you’re playing for three months right up until training camps and pre-season NBA workouts start. So it’s a great opportunity and we’re only going to see more and more guys making that transition from the NBA to the CEBL or CEBL to the NBA itself.”

The BlackJacks are hoping to capitalize on the level of talent they were able to bring in with a roster that is fundamentally different than what we saw last year. The practice arena isn’t the only new look for the team.

Last’s year training camp was attended by 8 players who were aged 30 or older. This year, only 2 players – Posthumus and fellow big man Ryan Wright – have reached that watermark.

“I think there’s more length, athleticism, youth, and probably more top end talent as well,” head coach Charles Dubé-Brais said of the this year’s team. “Last year what ended up being our best players were probably a three-guard line-up with three 6’1” guys on the court at the same time. Now you have rangy wings that can cover ground that can play.”

Tyrell Green, who along with Wright is one of two returning players from last year’s regular season, agreed with his coach’s assessment.

“I think we have guys that can play 3 or 4 different positions,” he said. “Definitely more versatile, probably a little younger as well, so we’ll have younger legs. I would say experience wise, it’s kind of the same. We had a lot of vets last year, and now we have a lot of guys who have played all over the place.”

For all the players on the team this year, whether they’re young or old, new to the league or vets, have one goal in mind. They’re here to win the championship and are thrilled at the opportunity to do so at home.

Jevohn Shepherd has done his best to assemble a roster capable of doing just that. But after a rough first year, he and the coaching staff could start to feel their seats getting warm if they come up short with the spotlight focused squarely on them.

Regardless of what happens, you won’t want to miss any of the action. And it all starts all Wednesday.