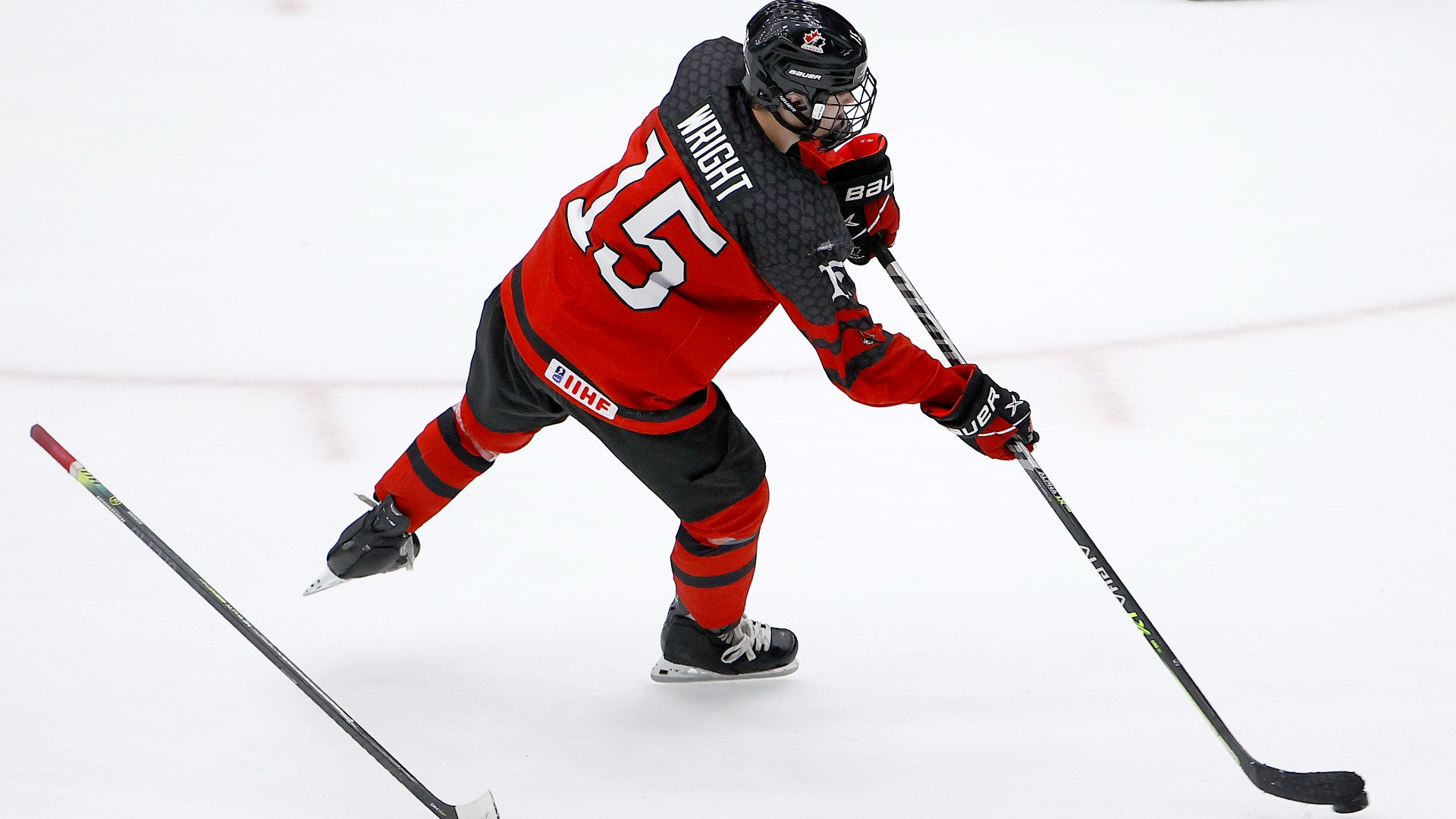 The stockings are hung by the chimney with care as hockey fans set out to discover this years’ Lafrenière.

Perhaps the biggest WJC storyline is centered around two of the very best prospects hockey has set eyes on in decades, in Russian Superstar Matvei Michkov and Canada’s Connor (2.0) Bedard. While my main focus is centered around who, among 2022′ draft eligibles we should keep a close eye on, I’d be doing a major disservice had I failed to mention the next Sidney Crosby vs Alexander Ovechkin parallel (aside from the difference in draft years).

As Tony points out, Bedard came to camp and made a statement. The 16-year-old cemented himself among the best U-20 players and that’s a feat that only one, 2022 draft eligible Canadian could do. Bedard joins some special company as one of very few to make this team as a draft -1. That list includes Connor McDavid, Wayne Gretzky, Sidney Crosby, Eric Lindros, Jason Spezza and Jay Bouwmeester.

As for Michkov, the headlines have not been any less than his rival Canadian. The Russian has been spectacular to say the least, don’t believe me? Watch this, curtesy of House of Hockey:

As for the 2022 NHL draft, it’s no slouch of it’s own and boasts some fantastic talent. As we know when it comes to players in their draft years, it’s not an easy feat making the top teams as a 17-year-old. This is an under 20 tournament and therefore we’re going to miss out on some of the finest the 2022 NHL draft has to offer. Here’s a couple of notable players who didn’t quite make the cut/or weren’t given real consideration.

Savoie is a skilled centre of the Winnipeg Ice, WHL. The Ice are an absolute wagon this year and Savoie is a big part of that with his league leading 45PTS through 28 games. Savoie is probably the closest candidate in terms of ability to catch Shane Wright at 1st overall. His offensive abilities are off the charts, he has great instincts and the only major slight on his game is his size/physical maturity (5’9, 178lbs). Should Savoie have been on the Canadian roster ahead of some of last years draft products, even if it means playing a wing position? You could make that argument from a talent perspective without much thought. Consolidated public draft rankings, currently have Savoie as the second best prospect. Here’s a look at some highlights via Delta Highlights:

Count me a shocked on this one. I thought Miroshnichenko was a lock for the Russian WJ team. He’s had an underwhelming season after graduating through Omskie’s program and making the VHL team. His transition to a more professional game has been anything but smooth and he’s rapidly falling down people’s draft rankings after coming into the season as high as 2nd overall on many lists. The Russian is known to be a powerful goal scorer who plays with physicality at (6’1 185lbs). Miro now sits #9 by consolidation of rankings and he’s possibly falling further after missing out on the WJC.

“He came into camp and wasn’t in the best conditioning, that’s why he wasn’t chosen.”

The Finns have a very young roster featuring many 2022 draft eligible prospects. There are two players in particular who should play major roles respectably on this team.

The returning young player who’s already established himself as a household name after scoring 4PTS in 7GP during last years tournament. The question entering the season for Lambert was supposed to be, how hard can he push Shane Wright for that projected #1 overall spot this summer. Unfortunately Lambert has unexpectedly hit a major wall this year. He’s one of the most intriguing prospects to watch in this tournament. Could the WJC spark a mid-season turnaround for the highly skilled Finn? His raw skill alone shouldn’t deter too many teams this summer, his skating ability, hands and decision making are all projected to be elite. The lack of production and really lack of ability to translate his talents to pro hockey has at least raised some red flags but not enough to slide too far outside the top 10 in my opinion. Watch for Lambert to regain some of that confidence and start ascending the draft boards, currently #8 on the consolidated boards.

Kemell, unlike his fellow countrymate Lambert, is heading in the complete opposite direction as he’s done nothing but rapidly climb the draft board this season. Kemell has made a seamless transition to the Liiga (12G, 8A, 21GP), playing against far larger, stronger competition and he keeps scorching goalies with his best in class shooting ability. Kemell has quickly become one of the most intriguing players to watch in this draft class. With his production despite his lack of size (5’11, 175lbs) scouts are drooling at his long term projection, once he matures physically. Kemell is must watch hockey, he’ll get all the primary opportunities to succeed at this years tournament. Kemell and his elite shot, currently rank 4th in consolidated draft rankings.

Last year it was Matthew Beniers, now a 2nd overall pick of the Seattle Kraken and this year, Logan Cooley. Cooley is the lone draft eligible player to crack the American roster. Cooley has many similarities to Beniers in fact, both known for their complete game and both utilize their skating ability to create chances. Cooley might actually have the higher NHL ceiling of the two, which is a feat in itself as Beniers is a projected #2 centre. Cooley possesses great hockey iQ and continues to shine at the USNTDP this year. He has #1 centre upside, he’s on the younger side of the draft (04 birth year) and has some raw elements to his 200 foot game. There are minor technical flaws to his skating, which can be looked at as a positive (he’s already very fast) and draws another parallel to Matty Beniers. He does not relent defensively and the effort he commits to on both sides of the puck make him a standout for me. The kicker here is that Cooley is the youngest player on the US WJC team and will likely play a more limited role in the tournament. Cooley is ranked #7 overall by consolidating the public boards.

Yurov is tearing up the KHL…well not exactly. He has 0 points through 21 games this season with Metallurg but scouts are not deterred by this, he simply hasn’t been getting an opportunity yet. Yurov is a player who will need to grow into his 6’1 frame and mature physically to a lesser degree (179lbs). He’s an interesting player to watch because many scouts will have a chance to solidify his spot amongst his draft peers at the tournament. What we know previously is that he’s a very dominant, dual threat talent. both scoring abilities and top playmaking abilities could be on display as he gets a much better look against his peers. Yurov will likely get a coveted offensive role with Russia and we could see this player really breakout on most people’s draft board, although he’s already considered a top 5, possibly top 3 talent in this coming draft, consolidated rankings place him 3rd overall.

Slovakia? Really? Yes! The Slovaks with not one but two notable prospects on their roster during this tournament. Starting with this years projected top defenseman, Simon Nemec. Nemec is an offensive minded defenseman who’s known for his superb breakout ability and his incredible read of the ice. With great passing and offensive instincts, Nemec is a must watch talent this holiday season. He will play in all primary situations for the Slovaks at this tournament, consolidated rankings have him entering play as the projected 5th overall pick in June.

Slafkovsky, who’s also already playing against men in Liiga this season, is another dominant Slovakian. The ginormous winger (6’4, 225lbs) is already man sized and that size alone will make him a force vs his much slighter peers at this tournament. Some see size as a concern, for the player could be closer to developmental peak from a scouting perspective however, Slafkovsky could actually be even bigger. He’s a positionally strong player, who was far too strong for his peers at the U20 level and thus graduated to the Ligga. He isn’t the most nasty, hard hitting player for a kid of his stature but he uses his strong hockey IQ and stick play to create opportunities. For a “big guy” Slafkovsky has a very powerful and effective stride, making him a threat off the rush or off the wall. The Size/speed rare combination have Slafkovsky 6th in consolidated rankings entering the tournament .

The projected 1st overall pick in this coming draft is entering the tournament leaving some things to be desired but at the same time is still considered a lock for 1st overall. This tournament might be just what Shane Wright needs to propel his game to where it was prior to this season. I realize that makes it sound like he’s had a bad season, he hasn’t, he just hasn’t had a definitive season to really put a stamp on things. His two-way abilities have been noticeable but his offensive prowess has been lesser than what many projected. Of course, the pandemic has impacted many players in this years upcoming draft and that’s something to consider. There are zero red flags when it comes to Shane Wright, he will however, be hoping to raise a certain red flag by tournaments end. Wright will have an opportunity to put a country on notice this holiday season.

With that, here’s to another fantastic bout of Junior hockey. I’m truly looking forward to watching the next crop of great, young talented players perform and jockey for that coveted top position during the 2022 NHL draft. Hope you enjoyed.