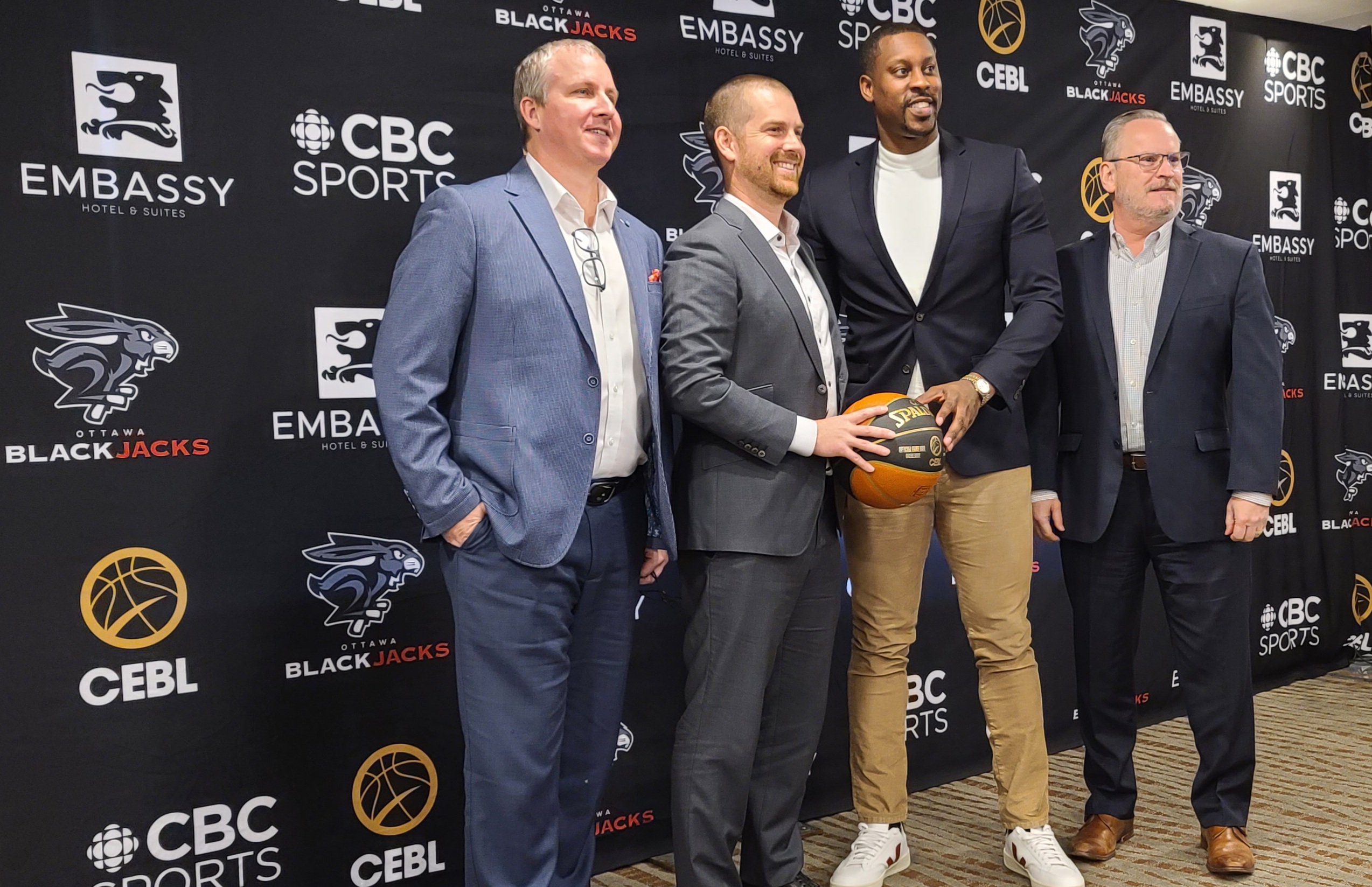 As Roger Daltrey once sang, ‘Meet the new boss, same as the old boss.’

The Ottawa BlackJacks announced on Monday that Charles Dube-Brais will return as the team’s head coach for the 2022 season. The move was made official during a press conference at the Embassy Hotel and Suites, whom the BlackJacks also announced a continued partnership with.

Dube-Brais led the BlackJacks to a 4-10 regular season record, good enough to make the playoffs as the sixth-seed. With a limited roster in their opening round game against the Hamilton Honey Badgers, Dube-Brais was able to make some last minute adjustments and pull out the huge victory. The team would then fall short in the semi-final matchup against the eventual champion Edmonton Stingers.

“I think last year, close to the end of the season, Charles came up big for us,” BlackJacks general manager Jevohn Shepherd said. “We had a rough season to start, and we ended up wining the biggest game of our season. For everybody that was involved, some of you guys heard what we spoke of in the beginning in terms of the culture we want to build; the type of people we want to build here. We’ve seen that embodied in that Hamilton game leading up to championship weekend. The big thing for me was when we looked around, we saw our support staff celebrating a win. Everyone was on the court hugging and laughing and just enjoying that moment. And I think a big part of that was having somebody at the helm that wanted to be here. With that said, it was the right decision for us to resign Charles. And he made the decision pretty easy.”

“I’m really excited to be back,” Dube-Brais said. “Like Jevohn said, it was clear to me that I wanted to be back here. I don’t believe in just trying to do something and then moving on to the next. For me, it’s about building relationships first and building something… You lay in that groundwork, you get the fundamental things done, and success comes after that.

“I saw a quality organization from day one when I came here,” he added. “Starting with Michael as the president, Shep in the front office, people like Carrie (McKay) who made everyday a little bit easier. You guys know my resume a little bit. I’ve been around the world with many organizations and you don’t see that everywhere. I thought I had that in Ottawa, which made my decision very easy. I’d say even before the season ended, I wanted to be back whether we won a championship or not.”

At the conclusion of the season, there were already rumours that Dube-Brais may leave for a position with the expansion Montreal Alliance. Given that he is from Quebec and resides there in the off-season, as well as being one of few Francophone head coaches at this level, he seemed like a somewhat obvious choice for that franchise. However, Dube-Brais was adamant that he always intended on returning behind the Ottawa bench.

“If there were rumours out there, there were no rumours in my head,” he said. “For me, it was, ‘I’m going to be back as long as the front office wants me here’. It’s been a very easy decision; one I’m thrilled about.”

For team president Michael Cvitkovic, bringing back Shepherd and Dube-Brais was key to help instill a winning culture. He believes that a teams identity begins off of the court, and that starts with having continuity in key positions.

“(That continuity is) very important – in fact, I think it’s everything,” Cvitkovic said. “There’s always changes in professional sports. I don’t think I’ve ever been part of a team in my career where there hasn’t been some change year over year. But you keep the core people.”

“The two gentlemen beside me are really top of the class in terms of that. Not just because of the relationship that we’ve been able to foster, but you talk to anyone in the basketball community, Jevohn and Charles are people that are respected. Not just because of their basketball IQ and the success that they’ve had as players, as front office staff and as coaches, but just as guys. Just good guys.”

Dube-Brais and the BlackJacks struggled to garner any sort of traction or consistency during the season, but there’s no doubting the impact he had in some of the team’s biggest games. He came up with the game plan that handed the Edmonton Stingers their sole defeat on the year, and put on a coaching masterclass in the playoff game against Hamilton. With his first season under his feet, he and the team are hoping for bigger and better things in 2022.

“We’re excited, I’m excited, and I think we have a bright future ahead of us,” Shepherd added. “We’ve laid our foundation and now it’s time to really grow from that.”