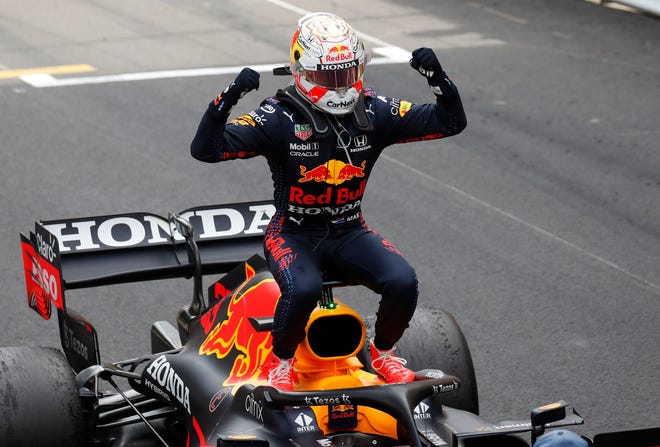 A massive shift has happened in the Formula 1 universe after this weekends Grand Prix in Monte Carlo.

For the first time since the German Grand Prix in 2018, Mercedes lead neither of the Drivers or Constructors Championships. Between Sir Lewis Hamilton’s struggles in qualifying and Valetteri Bottas’s front right tire not wanting to come off his car, the German giants just went through a weekend they will soon be hoping to forget. Hamilton started 7th on the grid (effectively 6th but more on that later) and spent the entire race staring at the gearbox of Pierre Gasly’s Alpha Tauri. This inability to overtake led the team to try something clever with his pit-stop, but this proved disasterous as not only did Gasly cover him off, but they were both overtaken by Sebastian Vettel thanks to a brilliant overcut from the Aston Martin team. Hamilton did salvage an extra point for setting the fastest lap of the race, which was also a new race lap record. Meanwhile, Bottas began the race in what was effectively second place, and spent the entire race there until his pit-stop, where he was forced to retire as the nut on his front right tire could not be removed.

Meanwhile, the Red Bull boys will be celebrating long into the night as Max Verstappen won the race, moving him into the lead of the Driver’s championship for the first time ever, and thanks to a 4th place finish from Sergio Perez, Red Bull have also overtaken Mercedes by a single point atop of the Constructors championship. Verstappen led every single lap of the race, except for the time in between his and Perez’s pit stops, and controlled the pace with great composure, leading to his first podium, and first win in Monaco. His teammate Sergio Perez jumped from 8th on the grid to 4th thanks to a vintage Perez drive, managing tyres and car very effectively, pushing hard when he needed to, and capitalizing on a great strategy from Red Bull.

It was a very encouraging yet heartbreaking weekend for Ferrari as Charles Leclerc took pole position on Saturday and Carlos Sainz started 4th, finishing in 2nd earning his first podium as a member of Ferrari. Leclerc became the first Monogasque to take pole at his home Grand Prix after putting in a stunning lap in qualifying, however on a lap later in the session, he crashed into the barriers, putting a stop to the session. This secured his pole position, but as was discovered during the warm ups on Sunday, did major damage to his drive shaft. This meant he was unable to even start his home grand prix and effectively moved every driver up one position when the race began. He watched from pit-lane as his teammate came home in 2nd place. On the other hand, it was a very good weekend for Carlos Sainz, showing that Ferrari can depend on him when Leclerc has difficulties.

Lando Norris of McLaren rounded out the podium places as he claimed his third podium in F1 and a further 15 points for himself and his team in the standings. The 21 year-old now sits third in the Driver’s standings, leapfrogging Bottas and is now only behind Verstappen and Hamilton. A strong showing from him and an important one for the team as teammate Daniel Riccardo struggled all weekend, qualifying in 12th and finishing there.

Sebastian Vettel won driver of the day in what was a double points finish for Aston Martin. A much needed successful weekend for the team and Vettel who had struggled with regulation changes this year up to now. Vettel finished 5th after starting 8th thanks to a brilliant overcut of Gasly and Hamilton and Canadian Lance Stroll finshed in 8th after starting 13th, in part due to a mega stint of 58 laps on hard tires to start the race.

Esteban Ocon of Alpine and Antonio Giovinazzi of Alfa Romeo respectively, rounded out the top 10 and the points positions. The latter picking up the first point of the season for Alfa Romeo.

Other notable highlights include Nikita Mazepin of Haas not finishing dead last, instead finishing ahead of his teammate Mick Schumacher for the first time this year. Not only did he not finish last, Mazepin also kept the car out of the wall, and out of the yachts of the onlooking fans.

Yuki Tsunoda in the Alpha Tauri also set a new race lap record when he set the fastest lap of the race on lap 66 of the Grand Prix, but held the record for only 3 laps as Sir Lewis would eventually claim the fastest lap, and record for himself on lap 69 (nice).

Furthermore, it was the first time in the 71 years of the Monaco GP that there was no safety car or virtual safety car deployed at any time during the race. In fact, there were no yellow flags shown at all.

The grid will return in two weeks time (June 4-6) to the Azerbijan capital of Baku for another street race, however this one is known for high speeds and overtaking. A beautiful tour of the more modern areas of downtown Baku in sector 1 before moving into the old city through sector 2, and a massive straightaway where cars can hit upwards of 350 km/h makes up sector 3.