Atlético Ottawa: Coupland is back! 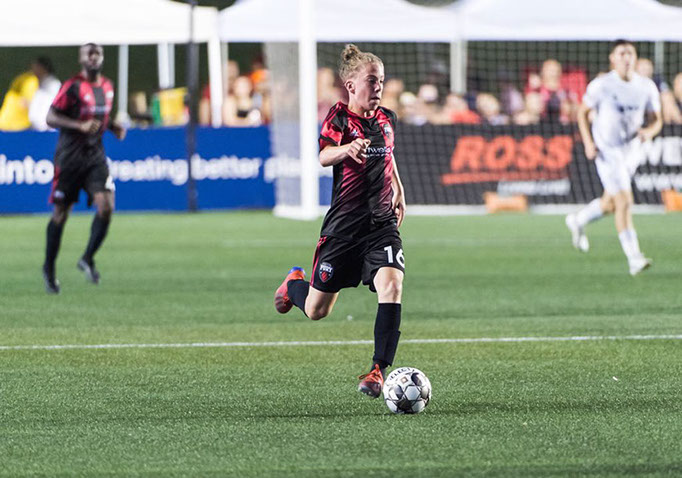 It was an open secret, but on Thursday, Chelsea’s sensation Antoine Coupland became the club’s second announcement after Ben Fisk.  I chatted with Coupland over the phone this afternoon.

Antoine is very excited to be (back) with Ottawa, as this where he wanted to play. He is definitely ready to take on TD Place again this summer, and continue his development.

This winter, he trained hard, including a three week stint in Germany that saw him train with Red Bull Leipzig and Eintracht Frankfurt, two well-known Bundesliga clubs. The coaches were very happy with his progress, and this experience appeared to have built on his first year at the pro level. Although he only accumulated 18 minutes last season with Fury FC (in which he also made 2 key passes!), his summer with a pro club allowed him to learn to train at the professional level, while being guided and mentored by seasoned players.

Over the winter, he received offers from different CanPL clubs, but the league advised him of the developments in Ottawa, and from there, it became his best option. For such a young player, we can all recognize that it’s very important to be in a familiar area, with his family. He recognized it was important for him to stay in the region.  He still does not have his driver’s license, so his parents will still have to drive him to practices and games

Antoine has yet to discuss with Mista, but he is looking forward to meet him at the upcoming camp in Madrid. He is eager to continue learning and developing. Although he does not yet know how he will be used by the coach, he stands ready to learn and adapt to this new team and its style of play. This said, he is ready to contribute to the team with his offensive ability.

Coupland is definitely ambitious, and he told me that it’s still in his plans to eventually play in Europe, as it should be.

The teenager has a high development ceiling, and it should not come as a surprise that Atlético signed him. The CanPL is a ‘selling’ league, as was notably proven by the transfers of Tristan Borges to OH Leuven (Belgium), and Joel Waterman to Impact de Montréal (MLS).

So for Atlético to sign Antoine not only gives a local flavour to the team, but it also fits into their plans of discovering players. And for Antoine, the association of the Ottawa side with the famed Club Atlético de Madrid may give him the opportunity of a lifetime, while also staying in his hometown.

The fans gave him one of the loudest standing ovation at a Fury game when he stepped foot on the pitch on July 20th 2019, so he is looking forward to see them again. He told me that Ottawa deserved a pro soccer team, and that the fans here have a big heart. He sounded definitely ready to make this crowd roar again. Get ready, Ottawa, #COUPLAGGEDON is back in town.

Love the pic that got sent out with the press release. Hope Antoine leaves more bodies in his wake.#Couplageddon https://t.co/EJKo11hmU1 pic.twitter.com/sYaAWowv4a