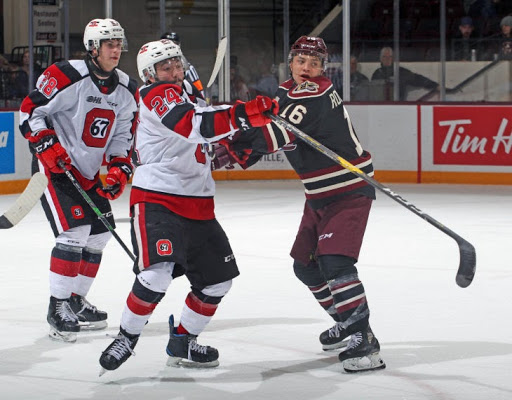 The Ottawa 67’s statistically had a good weekend, but the team didn’t play well enough for the majority of the weekend. The last time this happened, I put a positive spin on it, but this time, that isn’t going to happen. Buckle up, this is going to be different than anything I have done so far. Let’s get to the review.

@Hamilton: The 67’s were in Hamilton for the second time in two weeks on Friday, and the games were all too similar. The 67’s had plenty of chances to score the first goal of the game, but Marco Costantini came up huge numerous times. The first goal of the game would come just over halfway into the first period. It was Logan Morrisson putting the puck behind Andree to give the Bulldogs a 1-0 lead. Before the first period ended, Noel Hoefenmayer made the play of the game by taking the puck off the goal-line just in the knick of time. Navrin Mutter would open the scoring in the second period, and less than 20 seconds later, Bradey Johnson would add another, and the Bulldogs were up 3-0.

I don’t often interject my true feelings about performance into a review, but this time I have to. Despite the great game Marco Costantini had, the Ottawa 67’s were simply uninterested in the hockey game. Tim Nokte once said, “hard work beats talent when talent doesn’t work”. This was the case in this game. It is one thing to be outplayed, but for a team as talented as the 67’s are, it is unacceptable to be outworked. There are high expectations for this team, and winning every single game isn’t one of them, but I do expect to see a high level of effort and compete every single game. Back to the review.

It wouldn’t be until late in the second that the 67’s would get on the board. We have come to expect Jack Quinn to score a big goal at a big moment this year, and that’s exactly what he did. Quinn would score another just minutes into the third period on a nice deflection in front of the net, and just like that, it was a 3-2 hockey game. With 6:30 to go in the game, the 67’s set up a beautiful passing play to finally tie the game at 3. The game was far from over though. Less than a minute later, the Bulldogs would score on the power play to regain the lead. When all hope looked lost, Noel Hoefenmayer blasted a point shot past Costantini and tied the game at 4. In overtime, who else but Noel Hoefenmayer would score the game-winning goal? Hoefenmayer made some huge plays and secured a win for a 67’s team who didn’t deserve it. With the win, my predictions record improves to 36-11

@Peterborough: The Petes have given the 67’s problems all season long. The 67’s entered the game with seven losses on the year, and the Petes were responsible for three of them. After a rough night in Hamilton, I expected the 67’s to come into this game with more energy and drive then they did. Instead, we got the same flat team from Friday night, and the same thing happened. Before you knew it, it was 3-0 for the home team. The 67’s lost 4-1 and I correctly predicted it, pushing my record to 37-11, giving me a fighting chance to catch Ottawa record-wise, but that’s unimportant in the grand scheme of things.

I won’t recap this game any further, but as the title says, we have a problem. Instead of recapping, I’m going to talk about the problem.

The 67’s have now lost eight hockey games all year, and while that sounds amazing on paper, when you dig into the games they have lost, I become concerned. Of the eight losses, four of them have come at the hands of the Peterborough Petes. This is a huge problem and should concern you if you expect the 67’s to make a deep playoff run. There is a good chance the 67’s and Petes will meet at some point in the playoffs, and if Ottawa can’t get themselves ready to play the Petes, it will be a short series. The Petes have found a way to beat Ottawa, and I don’t know if that blueprint is going to stop working in the playoffs. The Petes maybe 17 points behind, but they might be a better hockey team. Something needs to change, and fast. It will help when Graeme Clarke returns to the line-up in early March, but the effort needs to be there when playing the Petes. That’s what it boils down to.

Vs. North Bay: Playing the worst team in the OHL is a good way to have a bounce-back game and give a full effort, and that’s exactly what the 67’s managed to do. There wasn’t a second where the result of this game was in doubt. There were many points in this game where I began to feel bad for the Battalion players, but the Ottawa 67’s rebounded just the way they needed to. The game ended 9-1 in favour of the 67’s, improving my record to 38-11. Shout out to Jack Quinn for his six points on the afternoon. And for everyone rooting for Thomas Johnston to score his first goal, it’s coming, I can feel it. Here are the highlights from Sunday’s game.

So it wasn’t the best week for the 67’s, but I would rather have a poor showing in the regular season than the playoffs. Things need to be corrected, particularly the effort, but knowing this team, they will come back stronger this weekend. Looking forward now, they are going to need to be better, this is going to be a hard weekend. Here is a look at the standings after week 21.

@Mississauga: The Steelheads have been improving as the year progresses and they have become a serious threat in catching the Sudbury Wolves. Being .500 isn’t exactly the best thing, but the Steelheads are 7-2-1 over their last ten games. The 67’s will need to keep tabs on Cole Schwindt, James Hardie, and Thomas Harley. Kai Edmunds will likely be between the pipes for the Steelheads. Edmunds was a pain in the side of the 67’s when they visited Ottawa earlier in the year, and I expect him to do the same this time around. This game on paper is the easiest game of the weekend, but with the Steelheads being hot right now, there is no guarantee the 67’s win this game. If we see a repeat effort we saw last weekend, I wouldn’t be at all surprised to see the Steelheads take this one. Ottawa normally bounces back nicely after a stretch of bad games, and I expect the same thing this time. Ottawa may come out of the gates a bit slow after the trip, but I expect them to win this game by a score of 3-1. This is going to be an important game to win to kick start a tough weekend.

Vs. Windsor: The Windsor Spitfires come to Ottawa having struggled as of late. The Spits have won only four of their last ten games, but don’t let this mislead you. The Windsor Spitfires are a very good hockey team and will give the 67’s problems in this game. The last time these two teams met, Ottawa won the game in overtime. The 67’s have won the last three meetings with the Spitfires and are 5-3-1 in the last five years. The Spitfires don’t have one player with a bunch of points, but rather many players with a fair amount of points. The Spits will roll the lines and have the ability to score no matter who is out there. The 67’s are good, but with what I have seen from the team in the last couple of weeks, the effort has been poor and taking away from the talent. If they want to beat Windsor, they will need a good effort. When the 67’s have a bad couple games, they come out and play very well. They beat up on North Bay, and I expect the 67’s to come back even better this weekend. That being said, this is going to be more of a blowout than most would expect with Windsor coming to town. Ottawa is going to win this game 5-1, and Marco Rossi is going to score 3 goals and add an assist.

So there we are. The effort needs to be better from this Ottawa team for sure, and I expect that to come. We should see some entertaining hockey games at the very least this weekend, so if you’re a hockey fan, you will want to tune into these!