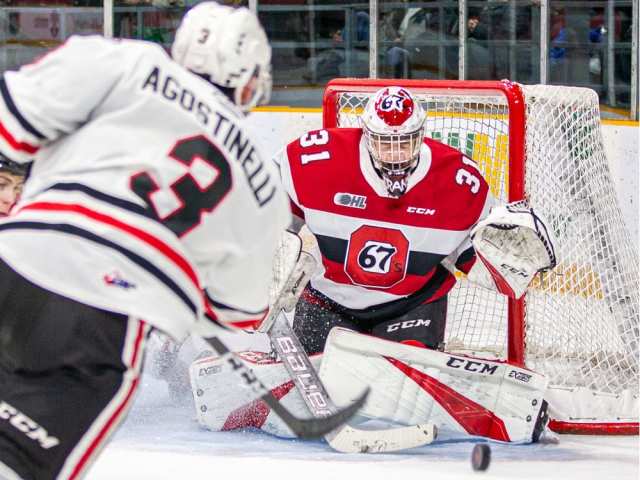 Last week, I complained about some things that were holding the 67’s back, but this week there was nothing to complain about. It was an excellent week for the boys, so let’s take a look back at what went down.

Vs. Niagara: This game was all Ottawa 67’s. It didn’t take long for the 67’s to strike, and when they did, it was Joe Garreffa tipping a point shot from Nikita Okhotyuk past the Niagara goalie and into the net. That was it. The game winning goal. The 67’s would score five more goals in a game that they owned. The IceDogs managed to shoot more pucks out of play than they did pucks in the net, and the 67’s ran away with a 6-0 win. Will Cranley now has shutouts in back to back games. Here are the highlights. My record improves to 33-9.

Vs. Saginaw: Saginaw is one of the better teams in the league this season and this game could be a OHL finals preview. Once again in this game, it didn’t take long for the 67’s to hit the board. Marco Rossi would go post and in just 64 seconds into the contest and give the 67’s a 1-0 lead. The lead would expand to two when Adam Varga scored a shot handed goal, and the 67’s would take a 2-0 lead into the intermission. Cole Perfetti scored a goal off a face off to cut the 67’s lead to one, but ten minutes later the 67’s would respond and take a 3-1 lead into the second intermission. The Spirit would add one more, but that would be as close as they got. The 67’s would score two more goals and take the game by a score of 5-2. I picked the Spirit, so my record is now 33-10.

Here is a look at the standings after week 19.

@Niagara: We all know what just happened between these two teams, and honestly, I don’t think there is any situation where it doesn’t happen again. There is simply to much separating the two teams. There is nothing Niagara can do to slow down the 67’s, at least I don’t think there is. They will need the best effort they have had all season to even have a chance in this game. The 67’s should be able to take this one with ease and continue to separate themselves from the Petes and get just one step closer to clinching home ice through out the playoffs. I’m picking the 67’s to win by a large margin, 10-3.

@Hamilton: For the second time in three weeks, the 67’s and Bulldogs will go head to head. Much like with Niagara, the Bulldogs don’t have the talent to silence the guns of the 67’s. We should see another game the 67’s control right from the get go, but I have a feeling this one is going to be closer than the Niagara game. If you look at the standings alone, you might not think there is much separating the Bulldogs and IceDogs. The only thing that is similar about the two is they are both named after dogs. The 67’s are better in every aspect, but this game won’t be a blow out. The 67’s are going to win this game 4-3 in overtime.

Vs. Sault Ste. Marie: The Greyhounds aren’t very good. That’s about all there is to say. The Greyhounds will be playing hard however. They are currently battling for the 8th and final playoff spot in the West, and beating the best team in Canada would get the momentum rolling for them to make that last push. The Greyhounds only have one player averaging over a point per game (Zack Trott), but that won’t stop them from giving the 67’s all they can handle. With the 67’s playing three games this weekend, I wouldn’t be entirely surprised to see this one slip away from them. I don’t think that is going to happen in regulation, but I’m actually going to pick the Greyhounds to win this game in a shoot out.

So there we have it. We are headed into week 20, and how fast has it gone? Won’t be long until the playoffs are starting! As always, be sure to follow me on Twitter @FrankieVideo.