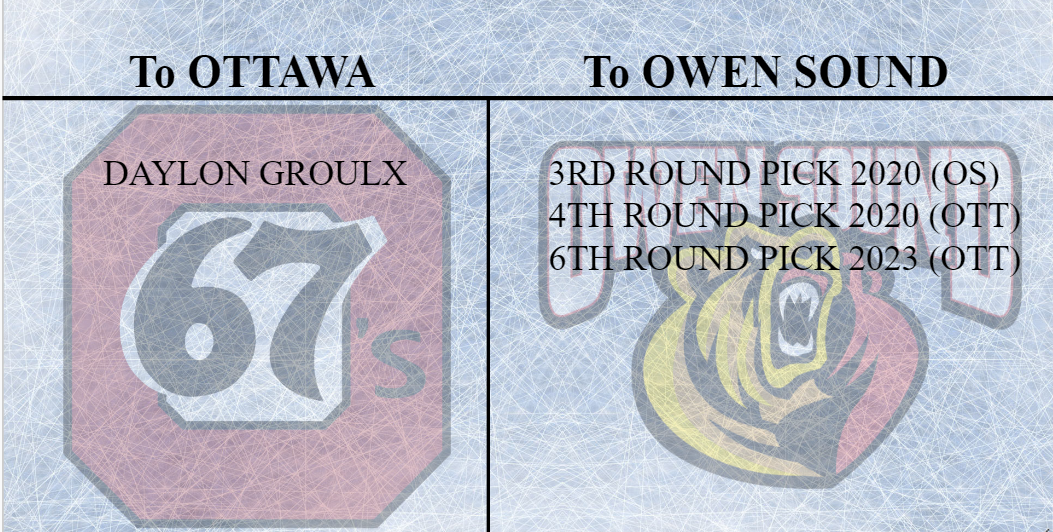 An incredibly busy weekend has wrapped up for the Ottawa 67’s, but along with it, so has the massive win streak the boys have been riding. This review is going to be a little different than the others considering the trade deadline has just passed. I will review both of the trades and offer up some of my thoughts. With that being said, let’s get to the review!

Trade Deadline: The OHL trade deadline was Friday at noon, and while the Petes made a huge move to acquire Akil Thomas, the Ottawa 67’s didn’t do a whole lot. Only 2 trades were made before the deadline, here’s a look.

The first move of the day was adding Daylon Groulx in a trade with the Owen Sound Attack. Daylon is a scrappy winger who (at the moment) is getting first line minutes with Austen Keating getting injured in the game against the Petes over the weekend. Groulx has already suited up for the 67’s in 3 games since the trade and notched 3 points for the barber poles. To go along with the 3 points, Groulx already has 13 penalty minutes including a fighting major. Daylon is going to add some much needed sand paper to the roster for a long playoff run.

The second trade of the deadline was sending Quinn Yule to the Flint Firebirds in a trade that confused me a little.

I have been saying so many good things about Quinn Yule this season. When we get right down to it, Yule was starting to become a reliable option for the 67’s at the bottom of the lineup. Quinn wasn’t going to be scoring any big goals or making any huge hits come playoff time, but I always felt like Yule could play a physical role against some of the bigger teams of the OHL.

With Yule out and Groulx in, the 67’s get a little smaller, but they get a little more skilled and much more gritty. Daylon Groulx is not afraid to stand up for his team mates, but it concerns me that he spent 13 minutes in the box in three games.

Overall, I give the 67’s a B- for their deadline moves. Nothing wowed me. There was talk of a big add, but it didn’t happen. If the 67’s get Graeme Clarke and Austen Keating back 100% healthy before the playoffs, they are a better team than the Petes. If those players aren’t back, the 67’s may have a shorter playoff run then they had hoped.

Now that we have gone over the deadline, let’s move on to the games played over the weekend!

Vs. Guelph: The Guelph Storm returned to Ottawa for the first time since game 5 of the OHL championship series. If there was ever a team I wanted the 67’s to destroy, it was this team. This game didn’t start the way the 67’s had hoped. Before everyone was in thier seats, the Storm had already scored 3 goals. Goals from Cam Hillis, Josh Wainman, and Eric Uba put the Storm out in front 3-0 in the first six and a half minutes of the hockey game. The #NoQuit attitude of the 67’s was going to be tested, and I would say it was an A+. The 67’s responded on a power play given to them because the Storm continuously tried to change after the referee told them to stop. Marco Rossi made a beautiful pass into the slot, and Joe Garreffa wouldn’t need a second chance. Not too long after the first Ottawa goal, Marco Rossi scored possibly the goal of the year to make it a 3-2 game. Or did he? Upon further review, it was determined the Storm had scored before Ottawa did, and that 3-2 game was suddenly 4-1. That was a let down, but the 67’s didn’t dwell on it. The 67’s would get it back about a minute later when Felix Tourigny’s shot got lost in a pile of bodies and beat Nico Daws cleanly. The first period scoring was far from done at this point, and at the 13:50 mark of the first, Marco Rossi made another beautiful pass over to Joe Garreffa on the power play. Garreffa fired his second of the game cutting the Guelp lead to 4-3. The Storm would answer back, and it was Jacob Roach with 5:12 left to play in the first period. Before the end of the first period, Nikita Okhotyuk would score from a sharp angle, and it was a 5-4 Guelph lead after the first period. That all happened in one period. If you wanted entertainment, you got it.

The second period slowed down a little for both teams, but the 67’s would tie it up on a goal from Alec Belanger, and then quickly take the lead on Austen Keating’s 20th of the season. The Storm would tie it up to begin the 3rd period, but the 67’s would score 3 unanswered to end the game. The game ended a 9-6 thriller, but I’m not sure either team would be happy with how this game went. I picked the 67’s to win in the low scoring shoot out game, and boy was I wrong about how they would win. Thankfully, I make the rules and this counts just the same. My predictions record is now 28-8.

One more thing about this game. Will Cranley may have been scored on 5 times in the first period of this hockey game, but he impressed me. He came out for the second and third periods ready to go. For those of you who have had the chance to play goalie for some time, you will know that the game is 50% mental. That wouldn’t have been easy, but he did it.

@Peterborough: I don’t have much to say about this game. The 67’s were flat and looked slow, while the Petes looked rested. The Petes would win this game 4-0 on goals from Nick Robertson, Max Grondin, Zach Gallant, and Semyon Der-Arguchintsev. I don’t want to make excuses for the boys, but this scheduling is a problem for me. I don’t understand the reasoning behind having the 67’s go from Ottawa on Friday night, the Peterborough on Saturday night, then back to Ottawa on Sunday afternoon. Also worth mentioning, the puck dropped a full 30 minutes later then it was supposed to. That’s all I’m saying about this game. The 67’s 17 game win streak is broken, and my record falls to 28-9.

Vs. Owen Sound: The former team of Daylon Groulx was in town Sunday afternoon, and this was another high scoring game. Thankfully this time, the 67’s have us covered with the highlights.

Daylon Groulx fit nicely on the first line in the absence of Keating who was hit from behind in the Petes game. Daylon scored his first as a 67, here’s the goal.

With the win, my record improves to 29-9. Here’s a look at the standings after week 17.

So a longer recap than normal, but there it is. Let’s move on the the weekend preview for the 18th week!

Vs. Flint: The ugliest uniforms in hockey and Quinn Yule will make their return to the ice at TD Place, and since the last time these two teams met, the Flint Firebirds have fallen off a cliff. They are now 10 points back of the Windsor Spitfires for first in the West, a spot they once occupied. Ottawa won the precious meeting 4-2 back in November, and I’m expecting much the same this time around. Ottawa is the better team, even without Graeme Clarke and Austen Keating. I don’t think this game is going to be a blow out considering Flint has a decent team this year, but I think Ottawa will edge out the Firebirds 4-1.

Vs. Hamilton: The Bulldogs have given the 67’s some fits this year, but without Jan Jenik who was injured at the World Juniors, the Bulldogs aren’t as close to as good as they were in the last two meetings. Ottawa should have the distinct advantage in the game. They are better up front, they have better defencemen, and I think that the 67’s have the better goaltender even if it’s Will Cranley who gets the start. I think this game will be a route, but only if Ottawa plays up to their potential. If they think this game is going to be easy, this game will be a lot closer then they want it to. Ottawa doesn’t often do that however, and I don’t expect them to here. Ottawa will win this one 9-3.

For those of you who don’t keep up with the whole OHL, you may not have heard the news surrounding the Bulldogs. It’s not great news for Hamilton fans.

The Bulldogs could find themselves playing in Burlington rather soon. This is going to be interesting. Remember, the Bulldogs only recently moved from Belleville to Hamilton.

@Oshawa: Back to Oshawa the 67’s go, but this time there is no Seron Noel for the Generals as he was traded to the Kitchener Rangers at the dead line. The Generals have added Philip Tomasino and could still be a threat to compete come playoff time. The Generals aren’t a bad hockey team, but there is something about them that makes me believe they can’t get it done against Ottawa. They have had chances this year and I keep picking them to win, but they just can’t do it. I’m not going to pick them until they prove to me they can beat the 67’s. Yes, they beat the Petes over the weekend, but maybe it’s more mental with Ottawa. I’m taking the 67’s 5-3 in this one.

So another week where I pick the 67’s in all of the games. It’s a chance for the 67’s to pull away from the Petes even more if the Petes continue to struggle. The 67’s are going to determine their own fate in the conference, and the faster they can put it out of doubt the better. Be sure to follow me on Twitter @FrankieVideo for more about the 67’s as the year continues!