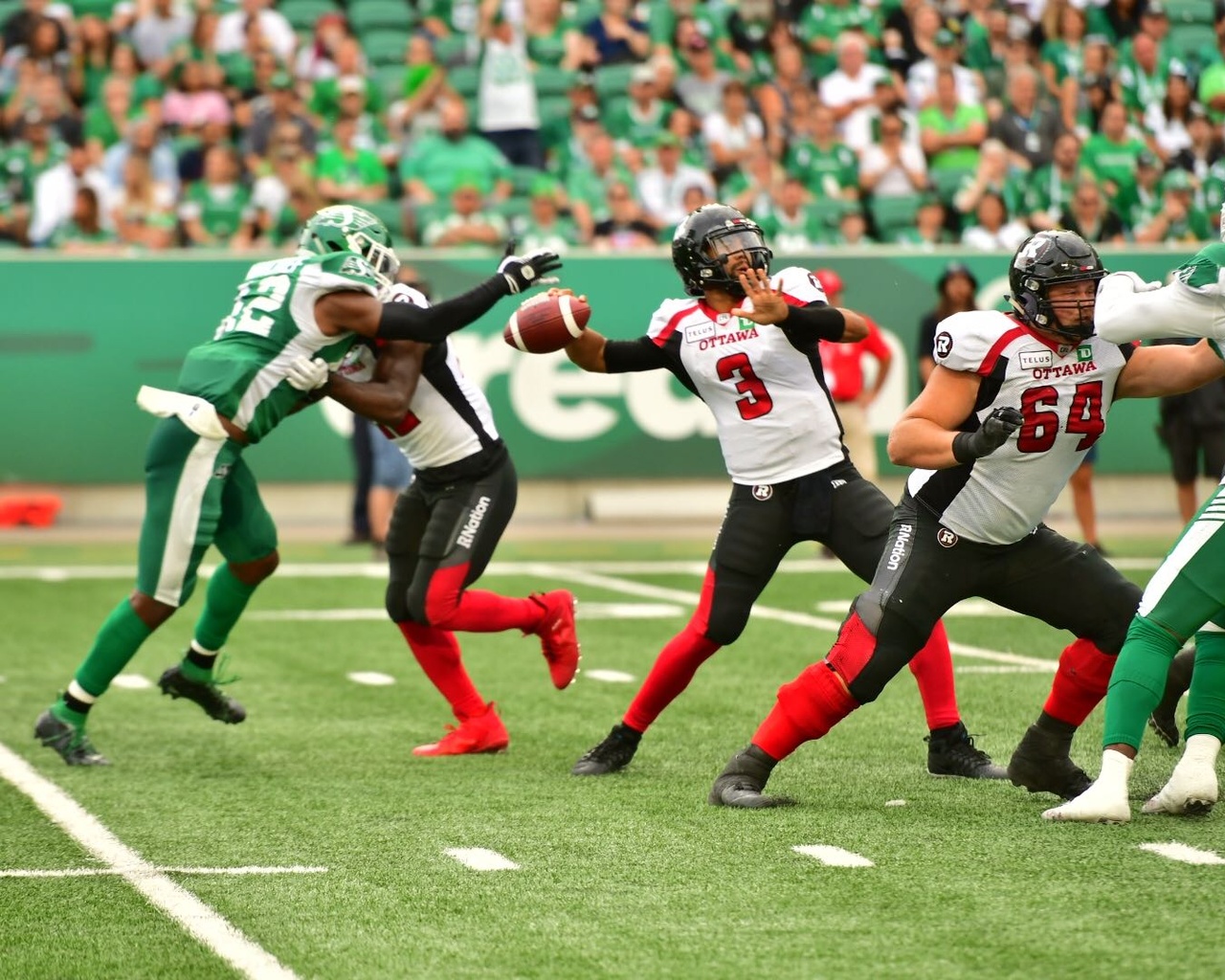 More than likely, the Dominique Davis Experience came to an end Friday night in Regina.

The interception-prone quarterback completed as many passes to Roughrider defenders as he did to his own receivers, finishing 3-of-6 for 23 yards before head coach Rick Campbell pulled the plug in favor of Jonathon Jennings.

Not only did the three interceptions all come within a span of 8:44 in the first quarter, but Saskatchewan turned those turnovers into 17 points, putting the REDBLACKS in a deep hole early.

The points off turnovers is nothing new for Ottawa this season; the team entered Saturday’s game having surrendered 71 points from 26 giveaways.

Enter Jennings, who despite a 5000-yard season in 2016, has had interception issues of his own. With nothing left to lose this season except more football games, the keys to the REDBLACKS’ offence should belong to him.

Jennings finished with 208 yards passing, completing 16 of 26 attempts, including a 75-yard bomb to Dominique Rhymes for Ottawa’s first touchdown since the first quarter of the Week 9 loss at Edmonton. Ironically, it was Rhymes who last found the end zone for the REDBLACKS, catching a 67-yard pass from Davis.

Although Ottawa found themselves on the wrong end of the scoreline for the seventh time in their last eight outings, the much-maligned offence did show signs of confidence.

Greg Morris came in for an injured John Crockett at running back and caught six passes for 50 yards while being the second-most targeted receiver on the night. Brad Sinopoli, the favorite target of Ottawa quarterbacks on the night, hauled in five passes for the first time since finishing with seven grabs in Week 7 against Calgary. Rhymes continued to cement his position as the team’s big-play receiver, catching four balls for the third time in his last four games while coming up just five yards short of a 100-yard performance.

Defensively, the REDBLACKS did not do much to put the pressure on Rider quarterback Cody Fajardo. Fajardo completed 24 of his 36 attempts for 241 yards and a touchdown, but was not intercepted or sacked. William Powell led a Saskatchewan ground game that churned out 122 yards on 20 carries and three touchdowns. Linebacker Jerod Fernandez paced the Ottawa defence with seven tackles, but the next four leading tacklers for the REDBLACKS were all defensive backs, which is not usually a good sign.

Ottawa special teams had a solid performance. Lewis Ward made all four of his field goal tries, including a long of 44 yards, and Richie Leone averaged 50.8 yards on his six punts. Stefan Logan had a 54-yard punt return late, and the coverage teams allowed just 5.0 yards on six punt returns and 26.5 yards on two kickoff returns.

The bye week could not come at a better time for the REDBLACKS, because if Jennings is indeed the man going forward, he’ll have another week to have the offence tailored to his skill sets and more time to get on the same page with OC Joe Paopao.

While moral victories don’t count in the standings, Ottawa has to see Jonathon Jennings as the silver lining to a cloud that has hung over their heads all season long.