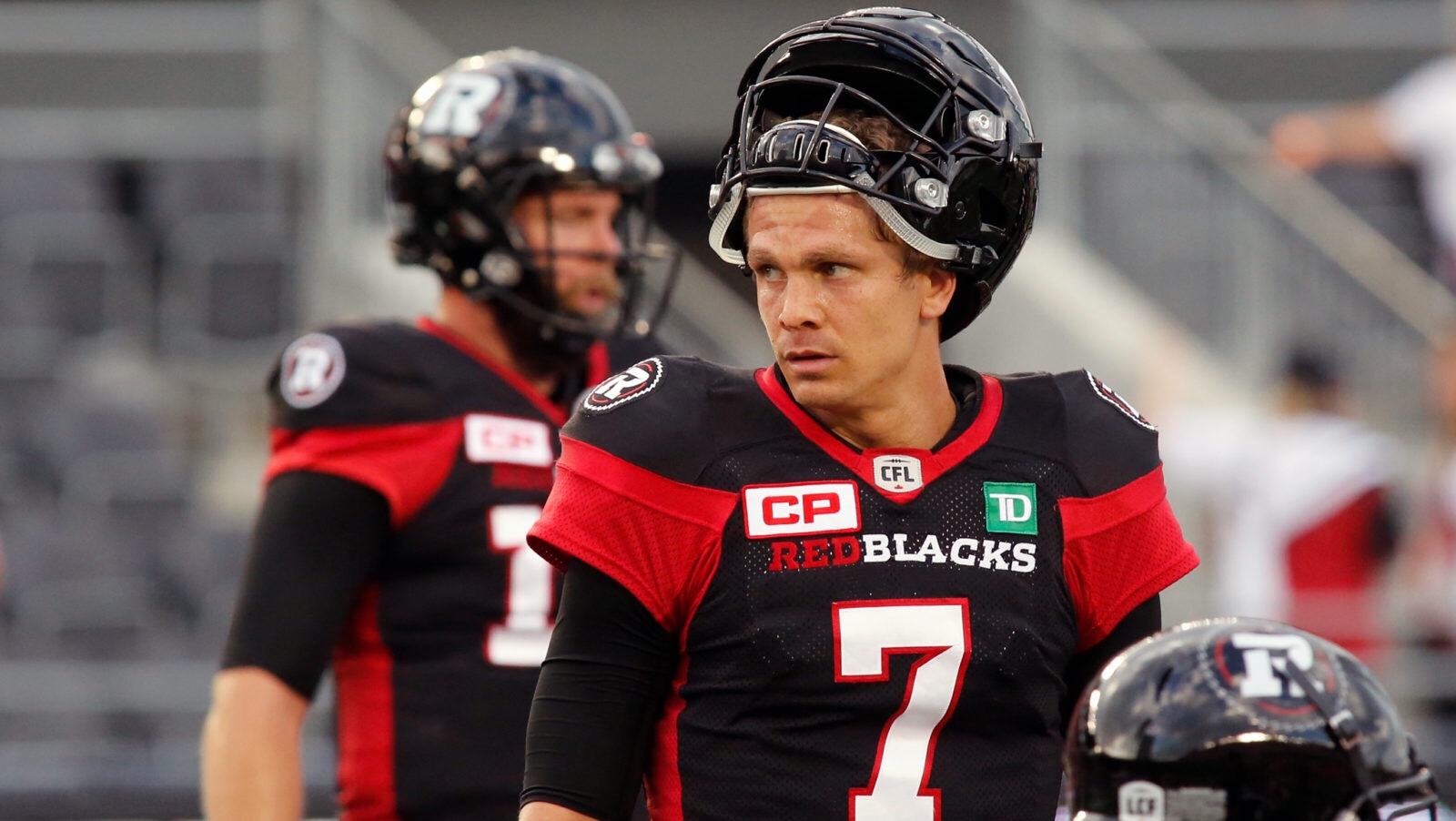 The departure of Ryan Lindley and Drew Tate make the REDBLACKS face a massive hurtle coming into the 2018 season: Quarterbacks. Harris is the only QB on the team with a substantial amount of CFL experience but even he still has a few things to work on. I feel like having Burris there one more year (in 2017) would have been beneficial to the team but that ship sailed. Ottawa also joins Montreal and Hamilton (to an extent Toronto) who are also in this position where they are extremely thin at QB. Ottawa the year prior had Harris as the starter and Drew Tate at backup which was not bad on paper but both got hurt and also the team had a whole mess load of problems that were addressed more this offseason. Right now I’m going to break down who the REDBLACKS have on roster so far (with as brief as I can a sum up on their careers.):

First we will look at the Starter and that is #7 Trevor Harris. Born May 31st 1986 in Waldo, Ohio. He attended Edinboro University in Pennsylvania where he would throw for 11,899 Yds and 100 TDs and a 66% completion rating. Interesting fact about that is he broke many records in the Penn State Athletic Conference but would set an NCAA division II record for most passing yards in a single playoff game tallying 630 Yds. He would lose that game 84-63 to West Liberty University in what would be his final game of his collegiate career. After not being drafted by any NFL team in 2010 he would bounce around the American leagues first going to the Jacksonville Jaguars lasting only the preseason then to the AFL and the Arizona Rattlers. Signing with the UFL’s Hartford Colonials back to the NFL with the Bills then to the AFL again in Orlando but never saw any action mostly being on the practice roster.
With Toronto

Needing to shore up the QB position and to find a good backup for the ageing Burris in the 2016 off-season Harris would sign with the defending East-division Champs: Ottawa. We in Rnation got our first showing of Harris quick as Burris would go down with an awkward finger injury midway through the 3rd Quarter in Week 1 vs Edmonton (Burris would be sidelined for quite a long time.) With the team’s destiny now in his hands his first snap under centre for Ottawa saw him long bomb it 71Yrds to Chris Williams for a TD and just like that it seemed like things would be okay. Harris would complete almost 90% of his throws only missing 2 (17 for 19) with 292 yards and 3 TDs helping Ottawa win a thrilling week one match up in a Grey Cup rematch. Those first 4 weeks of the season he would lead the team to a 3-0-1 record and going 104 for 126 (2,558 Yds), 6 TDs and only 1 INT before getting knocked out early in the Week 5 loss in Saskatchewan. Bouncing back the next week only to lose to BC and in a stretch till Burris returned on Thanksgiving weekend. With Burris now healthy Henry would take over for the rest of the year and Trevor would only see 1 more snap, ending his year with 3,301 Yds completing 242 passes on 330 attempts, 16 TDs and 4 INTs. He would regress in rushing with 126 yards on 30 attempts but did get 2 TDs. He would how ever get his first real Grey Cup ring (he was on the roster in 2012 but as we know didn’t see any playing time at all) and almost his first Grey Cup start however someone injected Burris with some sort of wonder product that made him a beast so silver linings.

With Burris pumped, primed and ready to defend Rnation’s Grey Cup title at home in 2017 and after getting reconstructive knee surgery right away in the off-season Marcel Desjardins tells Burris that his job is not guaranteed. Angering the god, Burris decides it’s not worth risking another year and goes out on top. He would take a nice job in TV where the TSN panel would continuously suck up to him after years of throwing shade on what was a really damn good hall of fame career. This would be bad news for Rnation but good news for Harris. A life time of hard work and effort to now officially have a team at his control. With the first game of the 2017 season being a rematch of the Grey Cup (as is tradition) in a home and home series to start the season with Calgary that saw Ottawa tie the first game and losing the second Harris would go a combined 60 on 85 (70.59%), 725 Yds and 5 TDs as well as 1 INT. Losing 2 more games to go 0-3-1 in the first 4 weeks (in all fairness all of them were close) finally winning in a terribly officiated game at home vs Montreal. To be honest here the first half of the CFL season was god awful when it came to the refs. Losing 3 more then winning 3 straight only to suffer a shoulder injury vs Hamilton in week 12 sidelining him and would miss the next 3 games but with Tate going down and Lindley starting Harris would return to save the team’s season winning the last 3 games only to lose in the East-semi at home vs Saskatchewan. The 2017 season in the end for Harris was on his part a really good one setting many career highs despite playing in only 15 games totalling 4678 Yds (CH) and gain a 69.58% completion rating going 398 on 572 (CH), 30 TDs, 11 INTs and a 103 QB rating. He regressed more in the rushing area only having 77 Yrds on the ground with no TDs. To put this bluntly the 2017 season was a very regressive season in total for Ottawa. That is to say there were hiccups on his end despite showing that he is a capable starter. Harris’ problems were more on his vision where for the many games that I saw he could have chosen his targets a bit more wisely especially in the key moments where the REDBLACKS needed 10 yards more but would choose the 2 yard dump off and get snuffed out. This is also in part due to the fact his two best targets Williams and Jackson left in the offseason but now this was a learning year for him. He is now the bonafide starter of the team and will no doubt, with the lessons he learned from 2017, be under centre confident (another thing he needed work on) that he will go to work with a solid receiving core and a returning backfield in 2018.
Dominique Davis #5

The so far defacto backup going into 2018 and when compared to Harris not much can really be said about him. Born July 17th 1989 in Lakeland, Florida. He spent his first two seasons at Boston College (2008 and 2009) but after showing poorly he would be unsatisfied with not playing all that much after losing his job and also on an academic suspension he would transfer to Fort Scott Community College playing in the NJCAA, tearing it up and winning it all in his division with an 11-1 record but losing in the national championship game to Blinn College. For 2010 he would find himself at East Carolina University where he would throw for 3,967 Yds and 37 TDs. Though finishing with a 6-7 record East Carolina would face Maryland in the 2010 Military Bowl (getting blown out 51-20) at RFK Stadium. Despite going 5-7 in 2011 Davis had himself a career year as being named to a few award watch lists and setting an ECU record for career passing TDs totalling 62. He also finished 5th all time in career passing yards for the school with 7,192. Even with a good showing in the NCAA he would go undrafted in 2012, but like Harris bounce around spending 2 years in Atlanta then the Titans only 3 days later to be released by them and signing for a month with the Colts. In 2015 he would make his way north of the 49th and sign with the Stamps but sadly to not surviving training camp that year. A few days later though he would be picked up by Winnipeg only playing in a week 20 game in Toronto (The last CFL game in Skydome and to make it weirder against Harris) He would go 16 for 25, no Touchdowns and gaining 169 yards in that 21-11 loss. In 2016 he would only see the field once in a 1 yard rushing attempt vs Edmonton in week 6. 2017 he was a 3rd stringer but got to see action in weeks 14 (vs Ottawa), 16 (vs Hamilton), and 19 (vs BC.) Totalling 208 Yds and 17 completions. Sadly there isn’t really much to say about him, his drawbacks are many where he doesn’t have the experience but hopefully he learns well in this new system. Who knows what will happen to him but I’m hoping this is where he finds a home, learns under Harris and develops well. I’m all for this as right now Ottawa doesn’t have much to work with if Harris goes down early, it will be a trial by fire for him as he is number two in the breach.
William Arndt #18 & Danny Collins #17

For the last two on the roster Ottawa has William Arndt from Sandy Hook, Connecticut, and Danny Collins from Williamstown, New Jersey and went to the U of Maine. Not much could be found on both other than Collins spending 3 games last season on the sidelines and before that spending time on a team in Germany. It’s safe to say that with not much to work with it will also be a trial by fire year for those two. Hopefully they work out.
Conclusion:

No doubt this is if not fixed with at least another QB with some CFL (or NFL) experience somewhere in between Harris and Davis Ottawa could be looking at a bad year or the polar opposite could happen and somehow everything clicks with the REDBLACKS riding into Edmonton for the Grey Cup and get off at Macdonald-Cartier Airport with the Grey Cup in hand but who knows. To give some options Marcel could try to get Dan Lefevour out of retirement or sign former MTL QB Jacory Harris who is at a Davis level in terms of experience. Worst case Ontario we get Sinopoli to play at QB. Though on the plus side many of the weak points from last season were mostly solved but sadly as you pay attention to one side you risk losing balance on the other side.