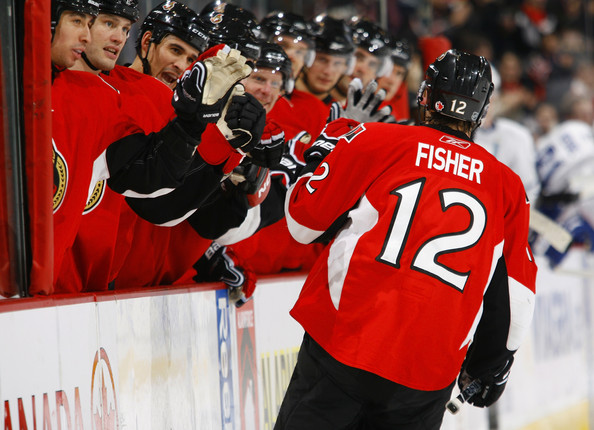 Darren Dreger recently speculated that this season may be Mike Fisher’s final year in the NHL. Fisher recently turned 37 and isn’t getting any younger. Although Fisher’s skills may be diminishing no one can contest the great player he once was, as well as the great person he continues to be.

Mike Fisher is and always will be one of the most beloved players by fans in Sens franchise history. Personally, Fisher was my favourite player growing up and I aspired to be like him as he was a perfect role model. Fisher’s NHL career began after being drafted 44th overall by the Ottawa Senators in the 1998 NHL Entry Draft. Fisher ended up being one of the steals of the draft as he was 1 of only 13 players out of the 258 drafted to score over 500 points during their NHL careers. Mike made his debut with the Senators during the 1999-00 season. The senators would go on to make the playoffs that season, however Mike would fail to dress for any of the 6 games played against Toronto. The following season Mike would get his first taste of playoff action against the Maple Leafs. During the 2006-07 season Mike would play an integral role in the Senators reaching their first and only Stanley Cup Final birth in modern franchise history. Fisher would tally 5 goals and 5 assists over the Senators 20 game playoff run.

Although Fisher had an outstanding career in Ottawa (7th in franchise games played, 6th in goals, 10th in assists, 9th in points, 4th in GWG and 6th in PIMs) his biggest contributions came off the ice. During his time in Ottawa Mike Fisher was one of the biggest supporters of CHEO and Rodger’s house. Mike donated commendable amounts of money to these outstanding organizations and also donated countless hours of his spare time to them. Mike was an annual guest at these organizations biggest events and always had time to take a picture for a fan or sign an autograph. He truly embodied what all young hockey players and people in general should aspire to be: a kind and down to earth person. In fact when asked about Mike Fisher after he was traded Ottawa Mayor Jim Watson gave a ringing endorsement for Mike, “Mike has been one of the good guys. He’s given a lot back to the community, including CHEO, and he’s helped raise funds over there. He’s been very visible in the community, and I can only wish him the very best.”

Trading Mike Fisher was one of the darkest days in franchise history. Whether it was the crying children in their #12 Fisher jerseys or the sorrow of his teammates who loved him like a brother. However, what’s done is done and we can only look back now on what once was; a great career. All the best to Mike and his family, and hopefully if this truly is the end that he may finally get his Stanley Cup ring this season and go out a champion. There are very few players more deserving to finish on top.