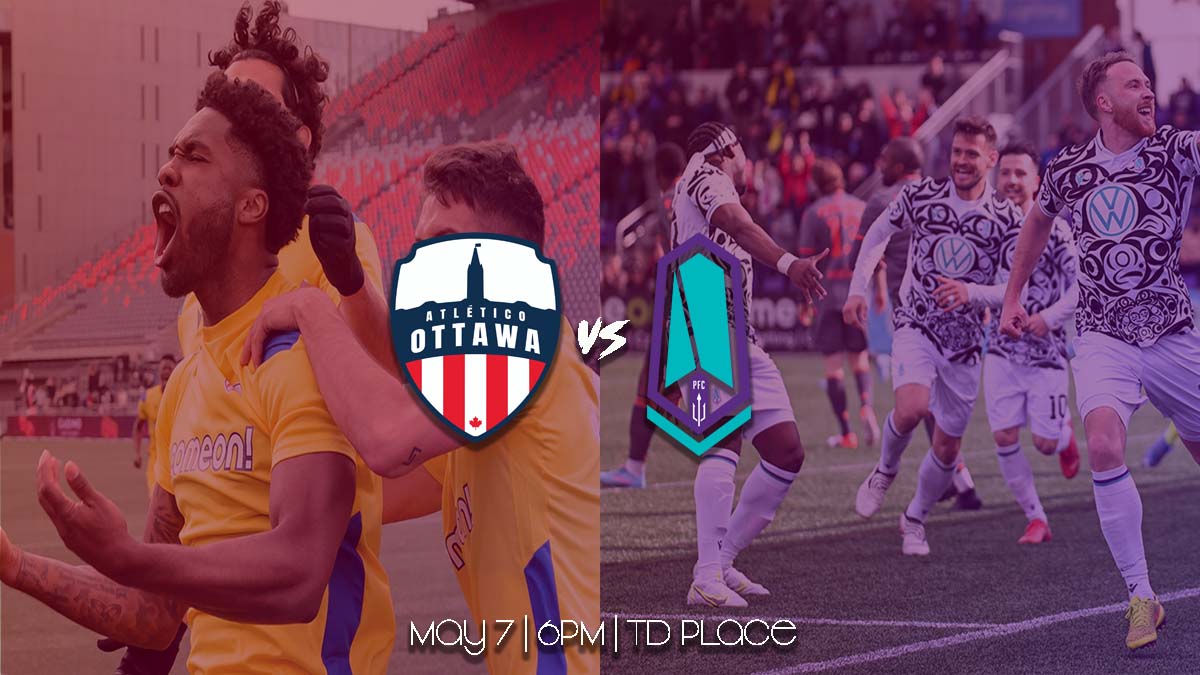 Last week Ottawa needed to prove to everyone that the Valour game was just a fluke. After being a couple seconds away from 3 points until another refereeing decision robbed them, ATO is still looking to prove themselves this week, and what a better way to do this than by facing the reigning CPL Champs and current first placed Pacific FC. Here are headlines to watch for this week:

We wouldn’t be here without our Mom’s <3

Need some last-minute plans for Mother’s Day? (Don’t worry, we won’t shame you). Look no further than this Saturday’s game. Atlético Ottawa is offering a Buy One Get One Free promotion for Mother’s day, meaning you can bring your Mom for free! On top of that, ATO will be supporting Shelter Movers Ottawa.

The return of the Captain

Drew Beckie has finally served his 3 game suspension and is available for selection for the first time since the season opener. While we won’t know if Drew finds a place in the starting lineup until game time, Diego Espejo and Miguel Acosta are progressing well following their injuries in the last game, according to Atlético Ottawa. Whether this means they will be part of the lineup is something we will have to wait and see.

Fans of the Ottawa Fury have circled this game ever since the schedule has come out because fan favourites Jamar Dixon, Callum Irving and Thomas Meilleur-Giguere will be making their first return to TD Place since 2019. Of course, fans in Ottawa will hope they leave with 0 points, but it will be a nice reunion for all parties.

Who doesn’t love the Saturday night lights? In 2021, Games that started after 6pm at TD Place turned out to be the most competitive. Ottawa finished the season 1-2-2 at TD Place in games that started at 6pm and later with 7 goals for and 7 goals against. TD Place also arguably saw the best crowds for these evening matches… meaning that we should expect a thriller this Saturday.

First vs Second place. Despite having a game in hand on Pacific, Ottawa has a chance to draw level on points with Pacific and even take full control of first place depending on the result. Pacific is coming off a tough week 4, drawing 0-0 with Edmonton and then losing 2-0 to Cavalry. Despite the Alberta teams exposing Pacific’s weakness, Ottawa will need to be on their A-game. Pacific’s talent on the field is one of if not THE most impressive in the league. A simple lapse of concentration can end up with the ball in Ottawa’s net. However, Atlético Ottawa has an identity that they will bring to the game to win all 3 points.

This is the kind of opponent that we like, good teams that come here to put us in tough situations. Our job is to put them in tough situations and I think it’s going to be a good game to play, the typical game that all players want to be involved with. It’s first place against second and that gives us a lot of motivation.”

The draw against York left a sour taste in the mouths of fans and players alike. Pacific provides an opportunity to finally silence the CPL community and to show that Ottawa is the real deal. However, this Pacific side will also be gunning to show everyone that Week 4 was just a fluke and that they are still the team to beat. It’s a Week 5 colossal clash that is worthy of the Main Event under the lights. If you’re reading this the day before the game, tune in to a live preview show at 5:30pm EST hosted on Twitter on the Capital City Supporter’s Group Twitter account.