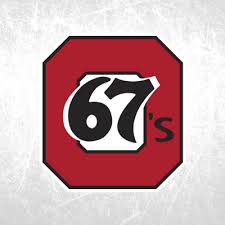 Last season didn’t end the way the 67’s and the fans envisioned it when they blew a 2-0 series lead to the Guelph Storm and were eliminated in the OHL finals, but this iteration of the 67’s stand a chance to be just as good this season. Despite losing key pieces such as Sasha Chmelevski, Tye Felhaber, Kyle Maksimovich, Lucas Chiodo, Kody Clark and Mikey Dipietro, the 67’s have the talent to fill the shoes of the players departed. Fortunately, the 67’s blue line appears to be left unchanged from last season and should be among the best in the OHL.

The 67’s played their second pre-season game today, where they beat the Sudbury Wolves by a score of 8-2. Many of the players left a good impression with the exception of a few who didn’t quite look OHL ready, however, they did show talent, and as these kids age, they could become really good hockey players. The 67’s got goals from Graeme Clarke (2), Marco Rossi (2), Cam Tolnai, Jack Beck, Mitchell Hoelscher, and Jack Quinn. Jean-Phillippe Tourigny looked solid allowing 2 goals on the 31 Sudbury shots, and only one person in the KRC thought Sudbury had actually scored when it appeared Chase Stillman hit the post with a shot, and that was referee Brody Caggiula.

What needs to happen?

For the 67’s to have a chance to be good this season, they are going to need Marco Rossi and Graeme Clarke to step up and become solid first options for the offence. With all of the fire power missing from the front end, those two are going to need to be the catalysts for the 67’s. Today for the 67’s both Rossi and Clarke scored 2 goals and looked dominant playing on the same line, and Clarke showed flashes of the talents he displayed in minor hockey, those same talents that led the 67’s to draft him 6th overall in the 2017 draft. Jack Beck (#19 in your programs) looked very comfortable playing along side Clarke and Rossi this afternoon notching 1 goal and 2 assists. The 67’s lost 6 forwards in the offseason, and need to avoid becoming top-heavy, and the comfort level of the Beck-Rossi-Clarke line keeps me wondering if those 3 should remain together going into the season.

Its safe to say that the 67’s defence and goaltending isn’t going to be the issue this season, but that its going to be the offence. Losing 6 forwards (Felhaber, K. Clark, Chmelevski, Maksimovich, Chiodo, and Bitten (146 goals, more than 50% of goals from the forwards last season)) is going to seriously test the prospects and the young players who end up making the squad. The reality is that in the OHL relying on 16 and 17 year old kids is not a good strategy and very rarely results in success. Players like Jack Quinn, Quin Yule, and Cam Tolnai need to take the next step in their development and score a little too. With 6 open spots, some combination of Sirizzotti, Dick, Johnston, Beck, F. Tourigny, and Cam Tolnai will be on the team. It seems as if GM James Boyd isn’t done with the trades yet, as OHL Insiders on Twitter has reported that dman Lucas Peric has requested a trade.

The 67’s currently have 7 OHL caliber defence men with some good looking prospects in Teddy Sawyer and Anthony Costantini who were both very impressive against the wolves. This lends well to moving Peric who could return the 67’s some draft picks. @OHLinsiders also reporting that the Guelph Storm are looking to move on from OA forward Liam Hawel. The 67’s could use a player like Hawel to get some talent and veteran presence up front where the team is going to be young in terms of experience at the OHL level this season.

There is no report linking the 67’s to Hawel, or any other forward for that matter, but there isn’t a report saying they aren’t in either, so I am going to be optimistic.

I can’t see Ottawa anywhere near as good as last season, but I can’t see them in the bottom of the east either. I see them in the top 4 in the east, but I also expect a slow start to the season as the players try to find some chemistry with one another. The defence and goaltending should be the reason the 67’s have a good year, and they will need to be fantastic if the 67’s have title hopes this season. Expect the unexpected, after all, this is junior hockey we are talking about.

The 67’s will continue with the preseason schedule and open the season Friday September 20th in Guelph when they take on the Storm in the OHL finals rematch. The home opener will be the following Sunday (September 29th at 2 p.m.) against the Peterborough Petes.